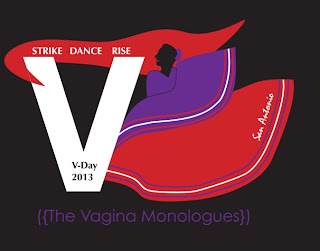 The Vagina Monologues is and isn’t exactly what you think it is. Eve Ensler’s collection of monologues gives a voice to a woman’s most sacred and sexual body part. Through past shames and discoveries, each actress represents the myriad of ways women view their vaginas. Each vignette offers a sexual rebirth and empowerment, but they also share hurt and vulnerability.

For three nights only, Woodlawn Theatre is hosting V-Day 2013 with The Rape Crisis Center, The P.E.A.C.E. Initiative and Family Violence Prevention Services. At 7 p.m. at the Woodlawn on February 25, 26 and 27, The Vagina Monologues will be performed to help bring awareness to domestic and sexual violence. The performance on Tuesday, Feb. 26 will be entirely in Spanish. V-Day 2013 in San Antonio is part of an international global action to end violence against women and girls founded by award-winning playwright Eve Ensler.

A sexual assault occurs every two minutes in the U.S. according to the U.S. Department of Justice's National Crime Victimization Survey. Rape is not a purely male on female crime with nine percept of rape victims being men. While it comes in many different forms, from domestic abuse to date rape, sexual assault carries with it a stigma for the victim. In 29 percent of rapes, neither the victim or perpetrator had been drinking with about 10 percent of rapes occurring in homes shared by the victim and perpetrator.

The Vagina Monologues is not just for women. There are plenty of laughs to be had at the expense of awkward, and sometimes very graphic, experiences. While the subject matter may seem private, it is the uninhibited humility with which it is presented that makes it approachable. Perhaps if our society wasn’t so afraid of sex and the physiology that drives it, there would be less an inclination to violently conquer it.

The performance is a short hour and a half and a small, but significant, way to show support for organizations like The Rape Crisis Center, The P.E.A.C.E. Initiative and Family Violence Prevention Services that provide counseling and support to victims while educating the community to promote awareness and prevention.