To take a walk in someone else’s shoes is easier said than done. But thanks to a new musical, In Their Shoes, by Tova Rubin, the shoe is on the other foot. In Their Shoes will play on the Russell Hill Rogers stage at The Playhouse March 6 and 7 at 6 p.m. and will benefit Street2Feet, a SAMMinistries program. 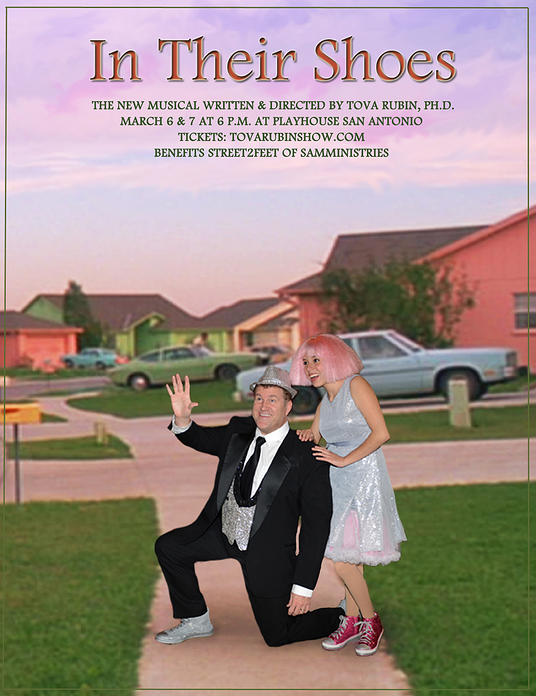 Tova Rubin, Ph.D. is a clinical psychologist practicing psychotherapy by day and a writer and performer of nonprofit fundraising musicals by night. Her latest endeavor, In Their Shoes, is a magical fable written in rhyme a la Dr. Seuss filled with popular tunes from Lady Gaga to Billy Joel and footwear themed melodies like “Blue Suede Shoes” and “These Boots Are Made for Walking.”

The idea for this particular production fundraiser came after Rubin heard about the Street2Feet program her friend, Elizabeth Rosenblum, had started with Megan Cullip as a SAMMinistries initiative to help the homeless literally get back on their feet. The two women, avid runners, launched the workout program in January 2009. They meet program participants a couple times a week to run with them and give them something to work towards. In 2010, they hosted a Street2Feet 5K event in February, which they’ve continued into 2013.

With an interest in Health Psychology and an appointment to the Mayor’s Fitness Council, Rubin, who ran this year's Street2Feet 5K in under 30 minutes, could see the benefits of the program and wanted to get the word out. She finished the script about a year ago, and was able to pull together an all-volunteer cast of talented local actors and dancers.

In Their Shoes tells the story of Goody 2Shoes (Mariela Flor Olivo), a little miss perfect who doesn’t understand why people act the way they do—particularly her mother (Shavonne Conroy). Goody’s father is played by Street2Feet co-founder Rosenblum’s husband, Rick Rosenblum, in his musical debut. In Mary Poppins fashion, Soulman (Lee Cusenbary) shows up in the nick of time to teach Goody a lesson about acceptance of others for who they are. Narrators John Tarnow and Renaissance Guild’s Danielle King speak for the characters, who are acting as pantomimes, until song breaks out. Actors are joined on stage by a chorus of dancers from The Playhouse Conservatory, HYPE program of San Antonio Council on Alcohol and Drug Abuse (SACADA), and David Castro and Jennie Cizmas from C&C Ballroom Dance.

“I really wanted to teach about empathy and compassion and the metaphor of trying on someone else’s shoes was such a good fit,” says Rubin. After working on adult centered productions, she really wanted to do something that included children. While the main character dons a cotton candy pink wig and the characters more resemble cartoons, adults will still enjoy the familiar musical spoofs. The takeaway: “It has a very strong humanistic message,” Rubin explains. To get the most out of the production, Rubin provided a study guide to the lessons for kids on the show’s website.

In addition to proceeds going to Street2Feet, audience members are encouraged to bring gently used or new shoes to donate to A Walk in My Shoes, a new program founded by Eric Castillo in July 2012 that provides shoes to organizations like Haven for Hope. A Walk in My Shoes generously provided shoes to line the stage for the production and will distribute those and any shoes donated by audience members to organizations in need. Running specialty store iRun Texas is a sponsor of the production and will be handing out $10 gift cards to shoe donors.

Rubin hopes that audiences will find the production uplifting and transformative amongst the glittering magic. In Their Shoes is about a willingness to see, to accept and ultimately to participate in a world with so many imperfections and opportunities to reach out to others. Or as Rubin puts it: “There’s no point in doing entertainment unless people walk away transformed and with a deeper understanding of the world around them.”


In Their Shoes plays on the Russell Hill Rogers stage at The Playhouse March 6 and 7 at 6 p.m.
For more information about In Their Shoes and to purchase tickets, visit www.tovarubinshow.com.
Posted by Jenni Morin at 11:00 AM