As the most produced play this season according to American Theatre magazine, Christopher Durang's 2013 Tony winner for best play, Vanya and Sonia and Masha and Spike, is a ridiculous mélange of Chekhov's characters and themes brilliantly mashed with his unique brand of culture criticism. The Classic Theatre production, now showing through May 17, pays homage to both Durang and Chekhov in a hilarious and perfectly cast tonic. 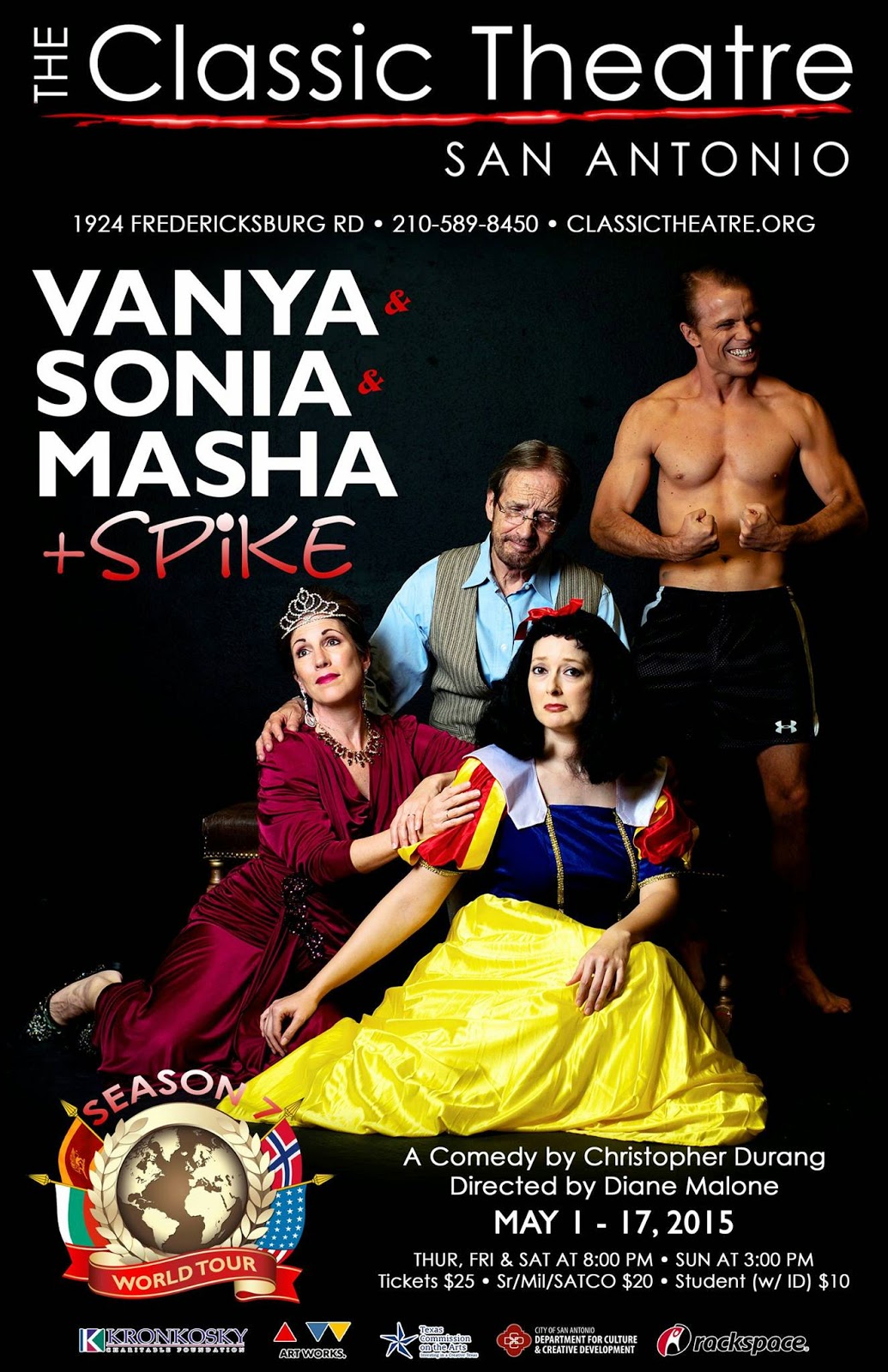 Vanya and Sonia and Masha and Spike is set at the estate of middle aged siblings, Vanya and Sonia, who have come to accept their pointless existence, not without complaining, after spending their youth caring for their ailing aging parents. Professors and community theatre enthusiasts, their parents named all their children after Chekhov characters. Masha, their sister, is an actress who pays for the estate and comes home to disrupt their depressingly mundane lives to attend a costume party. In an attempt to desperately cling to her fame, youth and beauty, she bullies everyone, including a neighbor girl Nina,  into being the supporting cast to her Snow White costume for the party. Sonia refuses to be one of Masha's dwarfs and insists on being Maggie Smith as the evil queen, upstaging Masha's costume and boosting her confidence in possibly meeting someone at the party. Meanwhile, Cassandra the housekeeper, who has premonitions just like her Greek namesake, warns against several threats, which everyone ignores until they come true. Masha's visit has brought out the charm of Sonia as she receives an invitation for a date and the confidence of Vanya who decides to share a reading of his play, inspired by Konstantin's symbolist play in The Seagull. Spike rudely answers a text during the reading, which sets off Vanya into a tirade about how things used to be in the 50s. Masha discovers Spike is involved with her assistant and send him packing. Employing a voodoo doll, Cassandra convinces Masha not to sell the house and the three siblings end with a tableau of contentment in their house by the cherry orchard.

Durang quickly explains most of the Chekhov references throughout the play as they come up, making it just as humorous for those unfamiliar with the Russian master. Beyond the obvious similarities in character names and preoccupations, themes of selling the family estate and Konstantin's play within a play, Durang, like Chekhov, introduces a wide range of well developed characters. This makes it easy to relate to the melodramatic tantrums and empathetically and emphatically experience the ups and downs of their tumultuous relationships. Durang may in fact be tapping into some of the humor Chekhov intended, which never seems to come across through the dark clouds hanging over his subtext-laden works. However, some of the deeper Chekhovian themes are embodied by Vanya then poured out in his monologue, which feels like a reflection of personal frustrations of the playwright. From lusting after an unattainable young mate to the younger generation's materialism to environmental sustainability, Durang offers a rich script that is as meta theatrical as it is entertaining, yet exceedingly difficult to execute well.

The Classic Theatre production of Vanya and Sonia and Masha and Spike is exceptionally well executed. Under the skillful direction of Diane Malone, each technical element highlighted, without overpowering, an incredibly talented ensemble. Both lighting by Steven Starr and sound by Rick Malone were respectfully well balanced, unobtrusive and restrained, pairing nicely with Karen Arredondo's functional set. While Kitty Williams' costumes, especially Sonia's party outfit, provided their own subtext, a special mention must go to Jan O'Neill for smashable mugs and the best teapot.

From Anna Gangai's (Sonia) impeccable comedic timing to Emily Spicer's (Masha) icy facial expressions, this cast flawlessly delivered every bipolar moment. Gangai's Sonia is undeniably endearing as the audience is on the edge of their seats during the entire one-sided phone conversation with a potential suitor. John O'Neill (Vanya) and Gangai are perfect compliments, marching to the sounds of their own piccolo, as he so gently steers his adopted sister back to a sunny disposition. O'Neill's lengthy monologue about the past is animated and charged with frustrations of society's audacious improvements that have left the simplicity and communal experience of the past behind. Danielle King as Cassandra energizes the Russian melancholy with a flourish of comedy uniquely her own. Spicer gives Masha an extra touch of humanity and hilarity in her uncomfortable interactions with Nina and suggestive moments with Spike. John Stillwaggon performs an entertaining audition scene, but like McKenna Liesman (Nina) has been given little to work with from Durang.

Vanya and Sonia and Masha and Spike will run at the Classic Theatre through May 17, 2015 with performances at 8 p.m. on Friday and Saturday and 3 p.m. on Sunday. For more information and to purchase tickets, visit classictheatre.org.
Posted by Jenni Morin at 10:36 AM