It's not every day to be privy to the inner-workings of the male psyche, especially when discussing the particularly sensitive topic of penile measurements. This is the centerpiece of The Irish Curse, the 2005 New York International Fringe Festival hit by Martin Casella. AtticRep's production of The Irish Curse, now playing at The Tobin Center for the Performing Arts Carlos Alvarez Studio Theater through April 5, is a humorous yet poignant search for male identity beyond the cock. 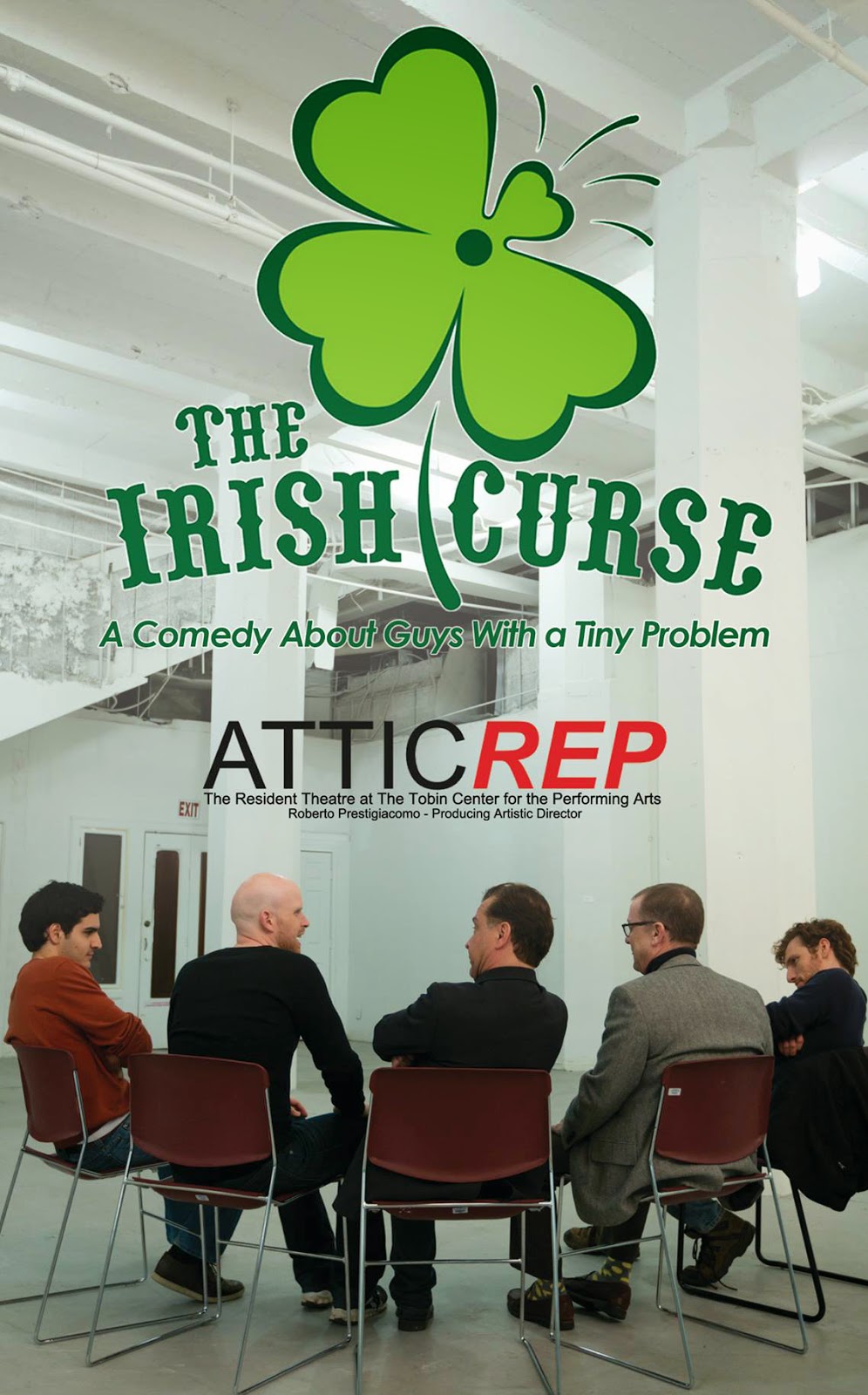 The Irish Curse refers to the notion that Irish males have small penises and so the play centers around a support group of men dealing with their cursed fate. While Rick, Joseph and Stephen have been meeting with Father Kevin Shaunessy in the church basement every Wednesday for months, Keiran, the newcomer for the evening, shifts the group's complaining session to one of real therapy and discussion. As each man details his life experience centered on the size of his member, Keiran pushes each to divulge a little more. Father Kevin finally reveals his story and then it is up to Keiran to finish the meeting with his.

The play is exactly what is expected and at the same time is suspenseful and surprising. It is as raw as it is cliche as the characters rattle off every cultural and ethnic stereotype about penis size, then reveal how this one small member has profoundly shaped their lives. Casella's script is so well crafted that it gently pushes ruckus humor to earnest confessions nearly imperceptibly. The discussion is uncomfortable in nature, but the constant barrage of cursing and derogatory name-calling makes it even more ridiculous that the men can't move past a popular belief and be comfortable with all the other features that define them. The men find freedom, reprieve and solace in camaraderie as they try to explain the reasoning and truth behind their actions, but they still must carry this new self awareness beyond the group and into their everyday lives. In their defense, the matter of size is at the root of everything from vehicle selection to war to racial tensions and politics. It is their self-esteem that takes a beating as they make comparisons in the locker room and the increasingly sexualized media defines their worth and the expectations of romantic partners. At its core, The Irish Curse is about discovering what it means to be a man, defining masculinity and acknowledging the true curse of the perceived inadequacies inflicted on them by society.

Before the production even begins, a soundtrack of humorous small penis tunes gets the audience chuckling during pre-show. Directors Seth Larson and Roberto Prestigiacomo start the show lighthearted and usher the audience through waves of emotions ranging from laugh-crying to heart-wringing empathy. Purely in blocking, the seeming game of musical chairs the characters play to make sure each one is seen by every side of the audience is masterfully choreographed. Scenic designer Rick Frederick and lighting designer Gaila Raymer display their talent through realism and detailing. While the lighting is mostly stagnant, save for rain pounding on the small windows, it nicely compliments the stale basement set dressed to the nines with an angelic birdbath statue, light fixtures and dusty crucifixes.

From the awkwardness to the sock-stuffing to the soul-bearing, each and every actor in the cast makes a lasting impression. Alejandro Cardona as Rick Baldwin kicks off the show with cheerful bravado and a false sense of security. His youth, hopefulness and willingness to keep fighting the urge to let the curse win gives each one a little faith. Tyler Keyes plays Stephen Fitzgerald, the tall handsome tough gay cop, with a gruff exterior and empathetic heart. Keyes' booming voice reminds the men to butch up and play the offensive to avoid rejection and pain. As Joseph Flaherty, Lawrence Coop embodies the most devastating backstory of a shy man foolish enough to believe love triumphs all. It is his cautionary tale that inspired the formation of the group and what keeps them coming back. Rick Frederick takes on the internally conflicted Father Kevin Shaunessy with poise and virtue. His confession compels each of the men to dissect how they have faced the curse. Finally, Sam Mandelbaum as the sweet lost soul Keiran Riley is endearing from soaking wet entrance to confident exit. By his prompting, every man shares, feels and thinks more about the power the curse really has.

This incredibly talented cast is expertly directed and manages to entertain, possibly offend, all while exploring a clandestine topic that rocks the very core of gender identity. AtticRep's The Irish Curse is the mirror theatre holds up to the world with a spotlight on humor and a new perspective as the takeaway. It is a roller coaster of emotions as it uncovers fresh perspectives to get the real answer to what truly is the Irish curse.


The Irish Curse runs at the Carlos Alvarez Studio Theater at the Tobin Center through April 5 with performances at 8 p.m. Wednesday through Saturday and at 2:30 p.m. Saturday and Sunday. For more information and to reserve tickets, visit atticrep.org.
Posted by Jenni Morin at 4:58 PM