Rumors: You know what they say about assuming

Neil Simon's popular farce Rumors, now playing at The Sheldon Vexler Theatre through May 31, is a staple in community theatre repertoires due to its snowballing chaos and rising tensions. While examining the effect gossip has on relationships and perceptions, Rumors also brings out the inherent humor in assumptions and inane cover stories. 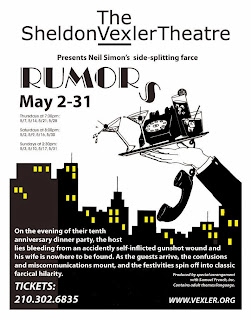 The play opens on the panicked Chris and Ken Gorman who have just found their friend Charlie Brock unconscious and bleeding from a gunshot wound upon arriving for a party for his tenth anniversary with his wife Myra, who is nowhere to be found. After getting ahold of Dr. Dudley to help treat Charlie, Ken realizes it's a superficial wound on his earlobe and he's in a Valium-induced sleep. Friends of the Brocks, Lenny and Claire arrive after having been in a car accident and speculate the missing hosts have to do with rumors of an affair, then Ken lets them in on the situation. As the other guests arrive, they must keep inventing excuses for the missing party hosts and absent staff. They seemingly convince the other guests, Ernie and Cookie Cusack, that everything is fine and even to cook their own dinner, until a second gunshot, rendering Ken momentarily deaf, raises further questions. Genn and Cassie Cooper arrive bickering about another rumored affair and everyone seems to get injured in some way as the first act culminates in a screaming, aching, exasperated tableau of chaotic desperation. Everyone has been filled in after dinner when the second act opens and they all decide to blame Ken. A mysterious woman calls for Glenn, making them think it's Glenn who Myra is having the affair with, causing Cassie to go ballistic. The police show up to investigate Lenny's car accident and seem satisfied with their answers until Glenn accidentally mentions the gunshots. Lenny, pretending to be Charlie, tells an impromptu story explaining the entire evening, which seems to satisfy the officers. Once they leave, Charlie offers to tell the real story of what happened.

Simon weaves a warning against gossip and assumptions into the chaos of Rumors to add a message to the otherwise mass confusion. Each of the characters has their own rumor-worthy secrets, which are revealed as accusations in many cases. Amidst the confusion and lies, Simon manages to leave evidence of not only the nature of the characters in crisis, but also of their backstories. This gives the farce a little more substance than those that seem to leave the audience constantly discovering pieces to the plot puzzle until it finally makes sense. Despite the depth of this farce, Rumors still requires a fast-paced and precise execution in order to build and maintain momentum. Simultaneously, the characters must remain frazzled while still being able to repeat the evolving volley of lies meant to explain the current predicament. The believability of the entire production rests on the ability of the actors to personify every clue given about their characters, rather than the plausibility of the situation itself.

The Vex production of Rumors has plenty of comical moments guided by director Michael Burger. Chad A. Miller's sound pairs perfectly with Ken Frasier's lights and set. Dylan Brainard even introduced a new character in his props with an extra long phone cord responsible for several humorous binds, literally. While all of Sophia Bolles' evening attire is fitting for the status of the characters, the description of Cookie's dress is not representative of the only one described in the dialogue. While the production faces inconsistencies in pacing, it isn't without its shining moments and some stand out cast members.

Scott Leibowitz leads the show as Lenny Ganz, keeping the cast on tempo and commanding the stage for his explanatory monologue. Chelsea Ortuno as Cassie Cooper and Robert Gonzalez as Glenn Cooper have great stage chemistry with one of the most engaging scenes of the show. Ben Scharff presents a steady Ernie Cusack with well-timed outbursts. Theresa Bishop's Claire Ganz is both snarky and detached while Jared Stephens as Ken Gorman brings the opposite with high-energy hysteria. Carlos Alvarado as Officer Welch holds his own as his partner officer Pudney played by Erin Polewski holds her own as the strong silent type. Cookie Cusack, played by Lisa Fritschle, seems more odd than eccentric, while Megan Van Dyke's character Chris Gorman is always on the brink of hysteria and more in need of Valium than a cigarette.

Never a dull moment, Rumors keeps audiences guessing as the characters make assumptions, spy and gossip until relieved by an official explanation. The Vex production of Rumors is a fun romp and one of the few farce plot that can be followed thanks to a few talented actors worth the ticket.


Rumors will run at The Sheldon Vexler Theatre through May 31, 2015 with performances at 7:30 p.m. on Thursdays, 8 p.m. on Saturdays and 2:30 p.m. on Sundays. For more information and to purchase tickets, visit www.vexler.org.
Posted by Jenni Morin at 11:55 AM