Elaine Liner’s Sweater Curse: A Yarn About Love currently running at The Classic Theatre is intelligent, well-tailored theatre with something for everyone – from seasoned knitters to classic film buffs. 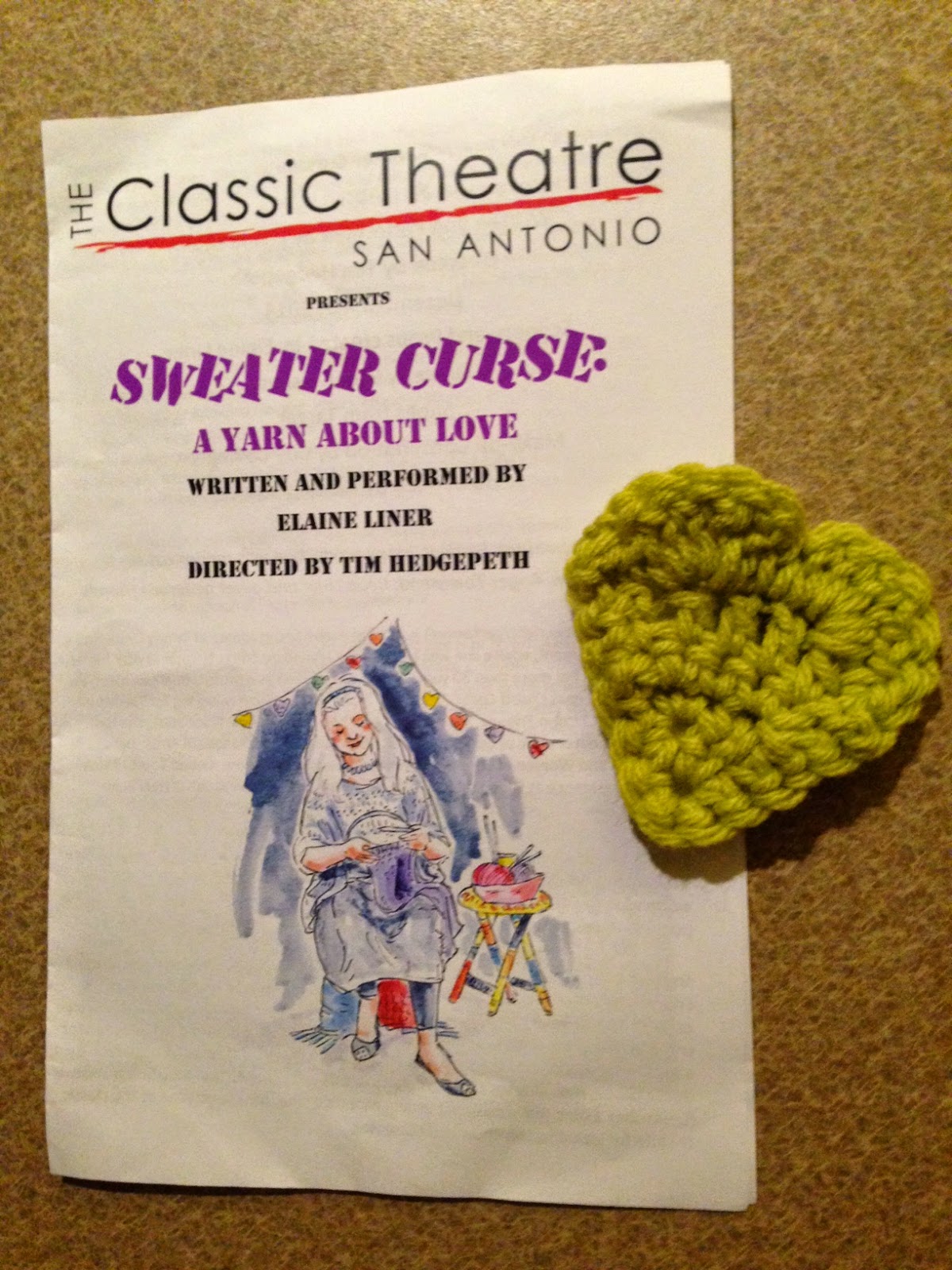 Written and performed by Liner herself, the script is what you would expect from an award-winning writer and it has been vetted and lauded at numerous festivals including two runs at the renowned Edinburgh Festival Fringe in Scotland. The 75-minute one-woman show proves that a sophisticated script can engage an audience just as well, if not better, than an over dramatized monologue or tawdry standup routine.

Directed by Tim Hedgepeth, Liner’s longtime friend and former classmate from Trinity University, the play is earnest, engaging and witty. Liner’s low smooth voice perfectly compliments her confident yet unassuming candor like a fitted cashmere sweater. She appears chic and stylish amongst her fibers as she commands the stage. The set pays homage to knitting with yarn-bombed furniture and a stockpile of sweaters knitted by Liner. Subtle lighting transitions help advance the monologue along with deliberate intervals of clacking knitting needles. After two years in rehearsal and performance, Liner has established a calm pace and captivating dialogue.

Her painstakingly constructed words illustrate the metaphor she draws between knitting and life, especially when it comes to love. In addition to a very relatable memoir of love lost, Liner weaves in mythology, history, pop culture, current events, film and, of course, theatre. From Odysseus’ Penelope to Shakespeare to Yarn Alive, the script transcends space and time to hone in on the old wives’ tale of the sweater curse. She discovers the truth behind the sweater curse, her own tendency to tempt fate, all the while shedding light on those sanskrit-like knitting patterns – and dating patters – doomed to repeat. While there is knitting vocabulary for the yarn crowd, non-knitters can appreciate references to literature and sharp-witted humor in addition to great acting.

Sweater Curse is where hobby meets intellect in a heartfelt tale of relationships and sundry purls of wisdom. Elaine Liner's care in crafting this script is just as evident as the love she puts into knitting her works of art.


Sweater Curse: A Yarn About Love will run at the Classic Theatre through December 7, 2014 with performances at 8 p.m. on Friday and Saturday and 3 p.m. on Sunday. For more information and to purchase tickets, visit classictheatre.org.
Posted by Jenni Morin at 11:05 AM