The Classic Theatre continues the theme of keeping up appearances with this season’s second show, Henrik Ibsen’s Ghosts. Each character is haunted by secrets, past regressions and feigned propriety and unable to live happily while the judgmental rule of morality forces them to live in darkness with their ghosts. 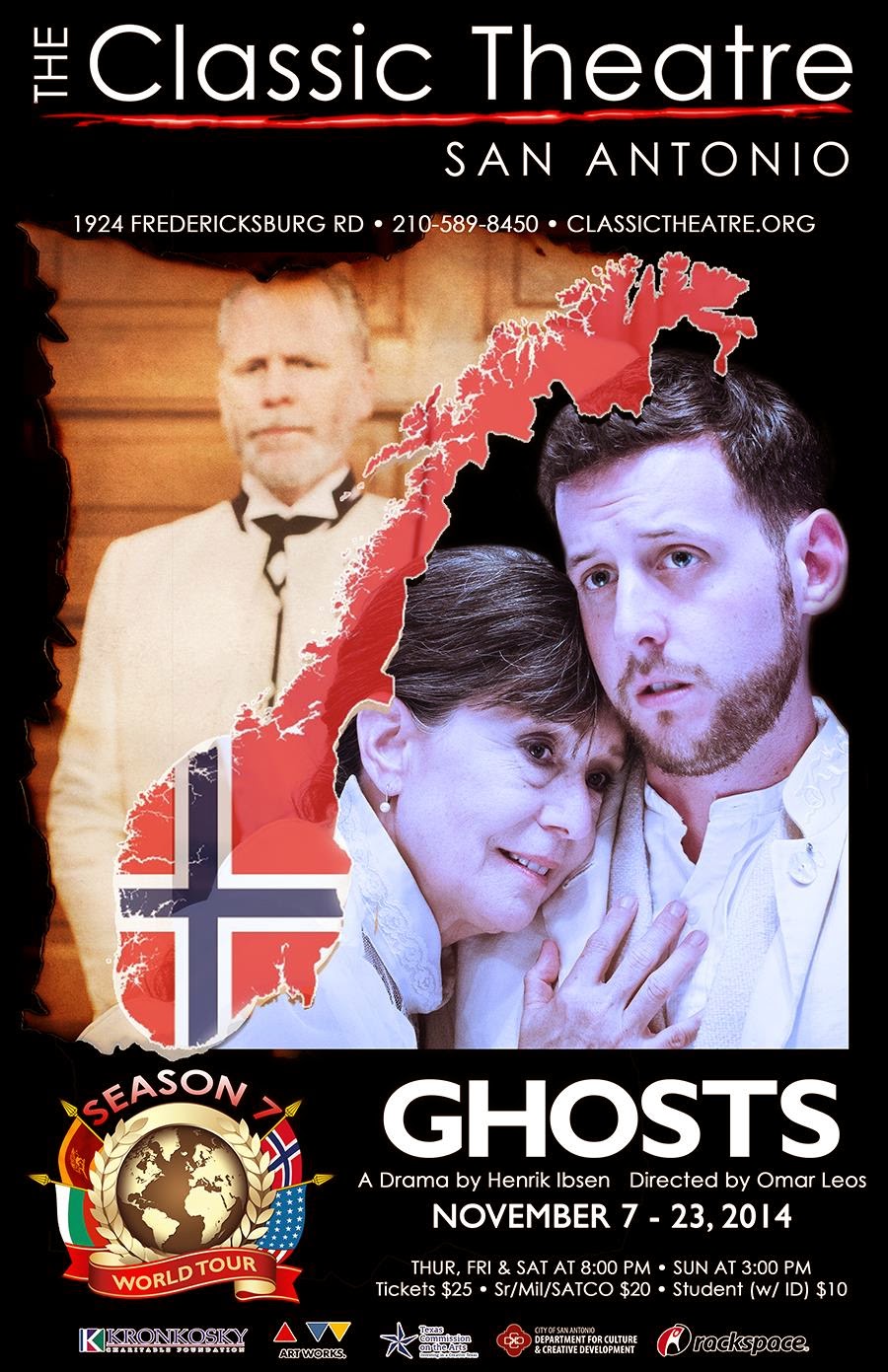 Written shortly after one of Ibsen’s most famous works, A Doll’s House, Ghosts was meant to shock and appall audiences and critics. It did just that when it premiered in 1882 as it discussed such topics as adultery, venereal disease, illegitimate children, premarital cohabitation and flat out deceit. The play opens with Regine Engstrand, Mrs. Alving’s maid, arguing with her father Jakob Engstrand, who wants her to come live with in a sailor’s hostel he hopes to open. Pastor Manders, an old friend of Mrs. Alving and her financial advisor, comes to finalize the paperwork to dedicate a new orphanage to her late husband. Osvald Alving, Mr.s Alving’s son, has returned home from painting abroad in Paris because of his father’s passing and an illness he inherited from him. As the debauched past of Mr. Alving comes to light, the ghosts of these transgressions turn the lives of everyone involved upside down.

Ghosts constantly puts duty and ideals at war with truth and insists that deceit breeds unhappiness and ruin. The imagery of the light juxtaposed to the dark, where the ghosts live, is quite beautifully illustrated in the script. Osvald feels the full burden of his inherited disease as it manifests physically and eats away at his brain—quite a visual for how secrets can fester and consume. Ibsen makes his stance known early in the play during the pivotal scene when Pastor Manders confronts Mrs. Helene Alving about the books she’s been reading. This integral scene lacked the finesse necessary to nail Ibsen’s point in this production. At times the dialogue seemed chaotic as actors jumped their lines, but was calmed by the telling looks and silences. The staging and blocking by Director Omar Leos was often the driving force that kept the pace for the show as the actors seemingly danced around the stage to involve the audience positioned in stadium seating on either side.

As always, Andrew Thornton as Pastor Manders was the anchor for the entire cast with a superior and consistent performance. Sam Carter Gilliam as Mrs. Helene Alving was definitely in her element with this period drama. She embraced the melodramatic tendency of the script, especially in the scenes she shared with Trevor Chauvin, who fully committed to the self pitying romantic “reinstated son” Osvald. Julya Jara and George Burnette, as Regine and Jakob Engstrand, were steadfast and impeccable.

The set, designed by Ric Slocum, mirrored the staging as the two entrance and exit points toyed with dimensionality. The skewed placement of the partially hanging set was a wonderful commentary on how things appear depending on the point of view. The score, written and performed by Darrin Newhardt, was ethereal and chilling, a lovely complement to the understated technical elements, which brought the show together.

Classic’s production of Ghosts is a scandalous journey through deep dark secrets, complete with subtle gems of brilliance and a cast fit for Ibsen’s ire and candor.
Ibsen warns that secrets should be abandoned, people should live openly and not to judge too quickly or our sins will haunt us and our descendents. While some of the consequences to not following this advice seem harsh and graphic at times, it is the blunt and unabashed truth which continues to make Ghosts pertinent and impactful. Audiences should delve into shameful embarrassing secrets, discover their own definition of immorality and form their own opinion of this contentious drama.


Ghosts will run at Classic through November 23, 2014 with performances at 8 p.m. on Thursdays, Fridays and Saturdays and 3 p.m. on Sundays. For more information and to purchase tickets, visit classictheatre.org.
Posted by Jenni Morin at 3:21 PM