Last weekend, TFC premiered the short film La Llorona at ArteFest. The two-day Día de los Muertos celebration was anchored by the film which used the legend of the weeping woman to illuminate the issue of immigration, especially the harrowing tales of children crossing the border and often caught in violence on their way to freedom. This weekend, audiences have an opportunity to take action on this issue with Kids4Kids. 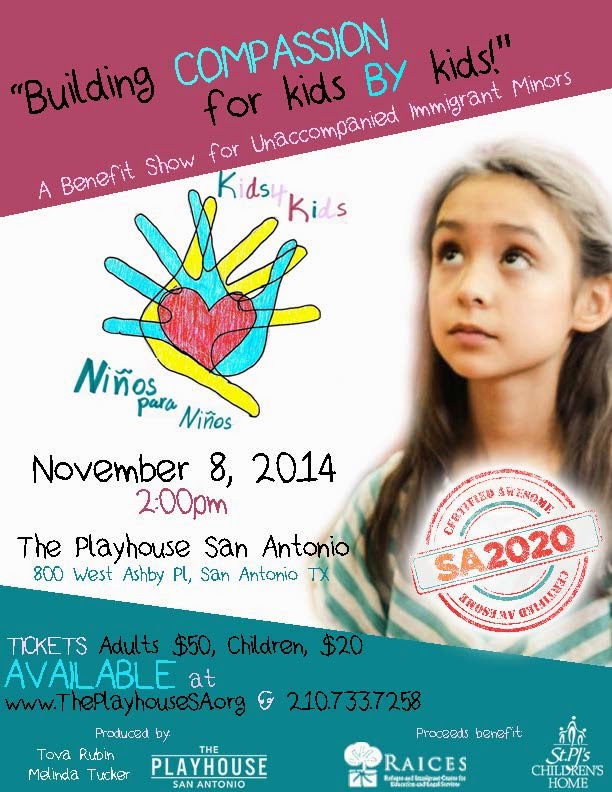 On Saturday, Nov. 8 at 2 p.m. The Playhouse San Antonio, Tova Rubin and Melinda Tucker will present Kids4Kids, a benefit performance aimed at raising funds and awareness for unaccompanied refugee and immigrant children. The is sponsored by Pioneer Energy Services and Shannon Sedgwick Davis and Sam Davis Foundation, allowing 100 percent of ticket sales to go directly to organizations stepping up to the cause.

Through the lens of children directly impacted by the work of St. PJ’s Children’s Home and RAICES to combat the immigration crises, the program will feature approximately 100 youth performers from various performing arts organizations around San Antonio. “The theme of the show is diversity, coming together to help children in need,” says Rubin.

The performance is for children by children in that each piece selected displays compassion and empathy while using the power of the performing arts to tell the story of hope, love and friendship, Tucker explains. After learning of the immigration crisis this summer with an increasing influx of unaccompanied minors flooding the borders from Central America, Tucker teamed up with Rubin and Playhouse CEO Asia Ciaravino who pitched putting together a show to benefit the two organizations “on the front lines of serving the children by providing a safe shelter, compassionate counseling, nutrition, education, hope, love and legal support.” Audience members are encouraged to reach out to organizations like St. PJ’s and RAICES to offer help either monetarily, through donations of needed items, through volunteering or becoming a foster parent.

More than 66,000 minors crossed the southwest border illegally in fiscal year 2014, which is an 88 percent increase from 2013. Children are often fleeing extreme violence, oppression, trafficking and abuse, but they are making the journey alone without the promise of family, shelter or safety on the other side.

Kids4Kids uses the arts to tell this story to cut through the political nature of the issue and bring back the human side. “Using the arts as a vehicle of change is so important because it tells the story on an emotional level that is difficult to achieve by just reading the news or seeing a sound bite while flipping through the news,” Tucker says.

She thought it was important to give a face to the issue by involving kids who may be the same age as many of the children immigrants. “Sharing their talents for other kids gives them an opportunity to be thankful for all of their many blessings,” says Tucker. “It also provides the opportunity for the kids to learn the importance of using their creative gifts for the good of the community.”


Kids4Kids will have one performance only on Saturday, Nov. 8, 2014 at 2 p.m. in the Russell Hill Rogers Theatre at The Playhouse San Antonio. Tickets may be purchased online through theplayhousesa.org or at The Playhouse box office. Those interested in making an additional contribution or unable to attend the performance can do so online at www.crowdrise.com/Kids4Kids.
Posted by Jenni Morin at 6:59 PM