A Christmas Carol is a holiday classic revived each year in theatres across the world to remind audiences to pay less attention to the ever-increasing commercialization of the season and more to the joy of yuletide togetherness.

Local playwright Sheila Rinear has paid homage to the timeless tale with her in-progress work, Merry Gentlemen. Back in June, Rinear had the opportunity to have the script read by some of San Antonio’s finest actors in the Cellar Theater at The Playhouse. Playhouse CEO Asia Ciaravino felt bringing the community into the project would allow audiences to become invested in the creative process. 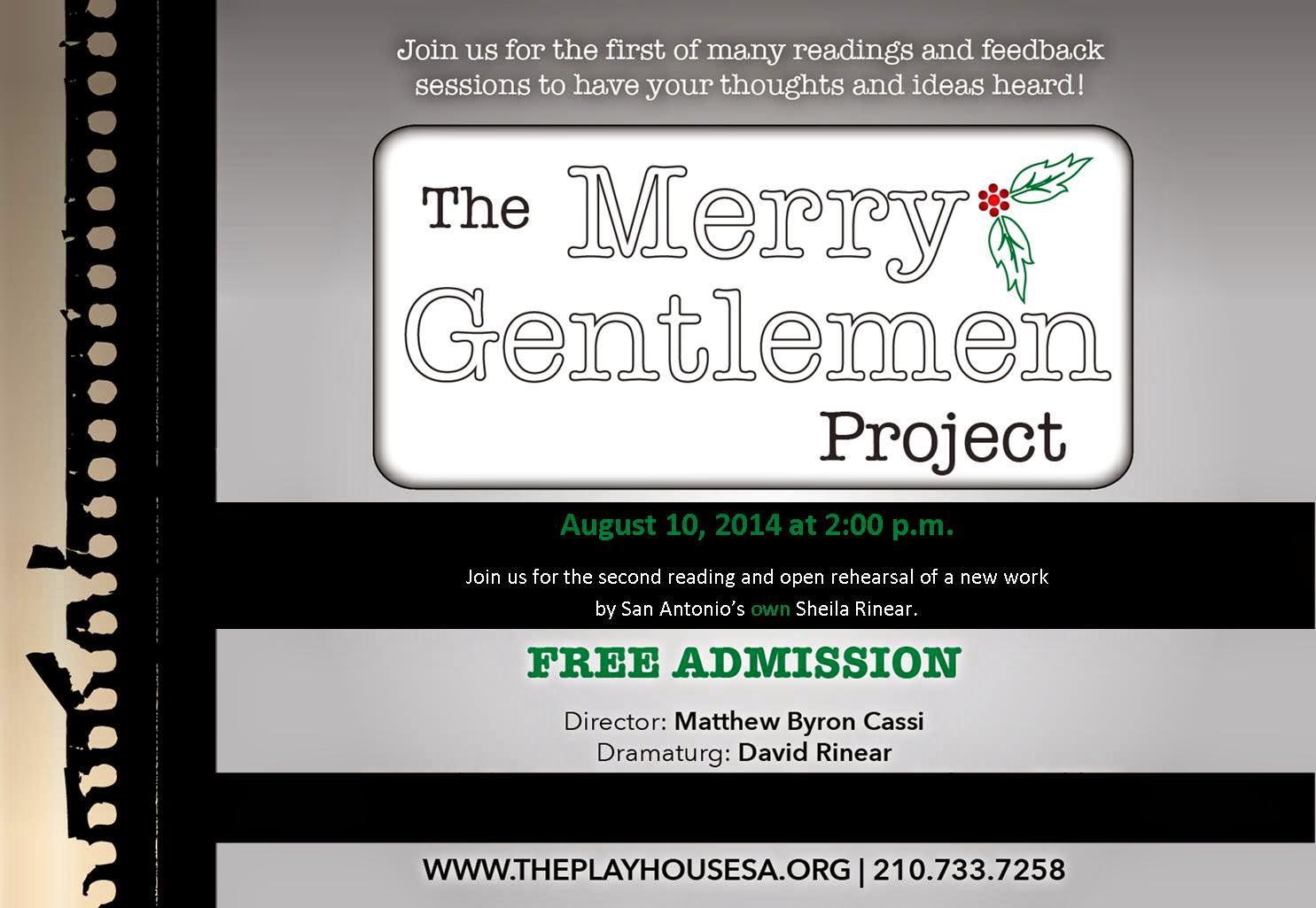 While the script development process usually takes place behind the scenes, out of the public eye, it’s extremely helpful for the writer to hear the script read aloud, see audience reactions and get immediate feedback before the words are set. “The audience response tells me so much, as well as the actors’ readings,” Rinear explains. In terms of investing in the project, audiences can feel some ownership in offering feedback and see the script grow over several revisions and possibly through to production.

Both the audience and actors were not shy in offering edits to the script after the June reading. Rinear took each into consideration for the next revision, which will be read by the same group of actors, with a couple stand-ins, on Sunday, August 10 at 2 p.m. in the Cellar Theater.

The play begins with Tim limping around, cleaning the apartment and taking care of his recently retired father. As a historian, Ben is constantly occupied with the past and the making of things, so Tim always took care of running the household while Ben was busy at work. Tim often speaks to his deceased mother, Isabelle, who was killed 13 years earlier in a car accident. As his only confidant and friend, Isabelle must find a replacement to look after Tim and Ben when she soon moves on.

Enter Miss Marley, assistant principal at Cratchett High School where Tim is failing all his classes despite having always been a star student. In an attempt to involve Ben more in the troubled teen’s life, Miss Marley takes him to the run down mall where Tim works and where Ben and Isabelle first met and fell in love. Iggy and Fu-Cha, two teens from the high school tease Tim, among other things, while Fred, the mall manager and cousin of Ben’s, tries to run off the “varmints.” After Tim confronts his father about not taking over the fatherly duties even after retiring, Ben finds ways to spend more time with his son and connect with him with help from the whole cast of characters.

Despite some rather adamant suggestions to make the script dark and twisty and spotlight the three specters from Dickens’ version, Rinear’s rendition stays true to her original intention: “It’s not a new adaptation,” she explains. “I wanted it to be a whole new story that would sound familiar.”

There are no rattling chains, but each incarnation of the “ghosts” are present in the script. Audiences will recognize the names alluding to various characters and some not-so-obvious, very clever nuances that add depth. The action, as one might expect, takes place around the holiday season, but the main character’s isolating obsession is far from money. “The story stands on its own, but there are enough elements from the original incorporated where audiences will recognize it,” Rinear says.

One element she’s still struggling with integrating is Scrooge’s signature phrase, “Bah, Humbug!” While staying in South Jersey between readings, Rinear often walked the beach shouting different possibilities to replace the iconic idiom, but to no avail. She jokes about offering a door prize at the upcoming reading for anyone who can come up with a fitting expression.

Some of the biggest revisions that came out of the first reading included beefing up the roles of the main characters. Isabelle received an added sense of urgency. After hearing the reading of Ben, she looked harder at him to give him more range. She wanted both Ben and Tim to be more wounded so they could help each other heal together.

After the second reading on Sunday, there is a staged reading planned for December when audiences will get to see the script with more action and closer to completion. There are no plans for a full-fledged production, yet, but Rinear hopes if audiences receive it well in December, a local theatre might elect to add it to its season for next year.

The reading of Merry Gentlemen takes place on Sunday, August 10 at 2 p.m. in the Cellar Theater and is open to the public, no tickets required.
Posted by Jenni Morin at 8:30 PM