Arms and the Man: More Appearances than Appendages

The Classic Theatre’s season production of Arms and the Man is full of fresh faces and the unique brand of George Bernard Shaw’s comedy. In this modern age it may at first seem dated and inconsequential, but it speaks volumes about daily interactions and ideals that define positions in society and social circles. 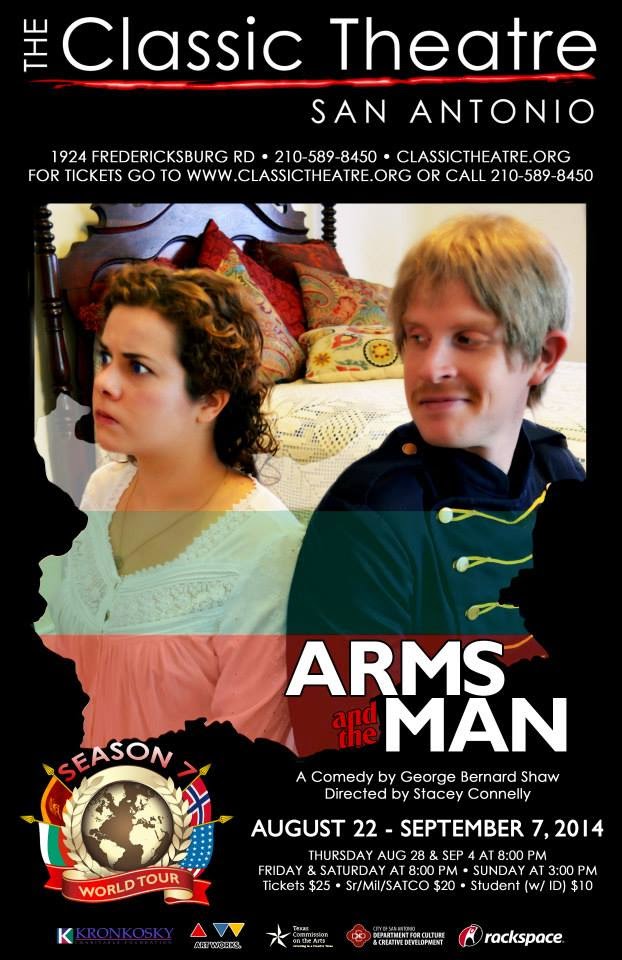 Set in the mid 1880’s in Bulgaria during the Serbo-Bulgarian War, Shaw’s Arms and the Man pokes fun at notions of love and war. Raina Petkoff is a wealthy heiress engaged to Sergius Saranoff, a major in the Bulgarian army, but she doubts his capacity for bravery until hearing of his valiant charge on the Serbian troops. As the battle comes closer to the house, Captain Bluntschli, a Swiss in the Serbian army, climbs in Raina’s window to avoid the artillery and debunks her fiancé’s heroism, stealing her heart after eating her chocolates. Louka, her servant contemplates spilling her secret, but her fellow servant and fiancé Nicola convinces her she could improve her station if she acts appropriately. When Major Petkoff and Sergius return victorious from the war, Raina and her mother discover they have heard the embarrassing story of their hiding Raina’s “chocolate-cream soldier.” When Bluntschli comes to return the major’s coat he used to sneak away, the whole house is turned upside down, engagements are broken off and stations are abandoned.

Shaw pokes fun at the airs Raina and Sergius put on for each other as lovers, questions the validity of class stations when Louka rises above hers and makes the heroes out to be fools. Director Stacey Connelly does an admirable job conveying these points through her cast. At first, Maggie Tonra’s performance of Raina feels stilted and uninspired, but as the action progresses, it’s obvious the dramatics were by design, exactly the airs Shaw intended to expose. Tyler Keyes as Bluntschli is reminiscent of a Mel Brooks-inspired Cary Elwes, complete with a brazen honesty and sarcasm. Kathleen Couser and Allan S. Ross as Mrs. and Mr. Petkoff take the comedy to new heights, with an especially wonderful performance by Ross who elevates the entire cast.

Abigail Entsminger designed a versatile set able to quickly transform for new venues, while Gregory Starbird’s lighting design had its shining moments. As always, Rick Malone’s sound design set the mood, especially with its quick-paced, up-beat transitional music. Jodi Karjala’s costumes brought it all together with great attention to detail, right down to the puffed sleeves.

This piece is an important part of Shaw’s canon as it was one of his first largely successful plays. While it feels like a comedy of errors, complete with several stock characters, Shaw uses these theatrical conventions to make a satirical point about the behavior of “heroes” and people “in love.” Bluntschli serves as the constant in the experiment, always truthful, forthcoming and perhaps even honest to a fault since he does not care how his actions reflect upon him as he is confident in his own character. He also proves to be the most capable of the bunch, while Nicola is the most cunning because of his ability to accept his station and what that entails, then leverage that knowledge to his advantage. These two are the most insightful, but Raina and Louka have the largest character arcs as they come into their own. In today’s world where a digital veil masks the true person, it’s not surprising a generation is coming to age without knowing who they are and what interactions are real. This play points out this lack of self-awareness and makes this script a very current one.

Arms and the Man is a perfect production to open the Classic’s season. It showcases some new talent—at least on the Classic stage—and reinforces the abilities of some seasoned favorites. In addition, the production asks audience to reflect on their own airs. Arms and the Man is not to be missed, it’s a great comedy for audiences to kick off the fall season back to the stage.

Arms and the Man will run at Classic Theatre’s new venue, the Blackbox Theatre at the Woodlawn, through September 7, 2014 with performances at 8 p.m. on Thursdays, Fridays and Saturdays and 3 p.m. on Sundays. For more information and to purchase tickets, visit www.theclassictheatre.org.
Posted by Jenni Morin at 11:50 AM