The second act of Spring Awakening, opening Friday at The Playhouse, delves into the darkness that overshadows these teens lives when left to their own devices under the strict and tight-lipped rule of the adults in the script. After Wendla gives in to her desires and has sex with Melchior, she becomes ill. Her mother, fearing anemia, takes her to a doctor for a diagnosis—she is found pregnant and her mother is furious and embarrassed and quickly schedules an abortion. 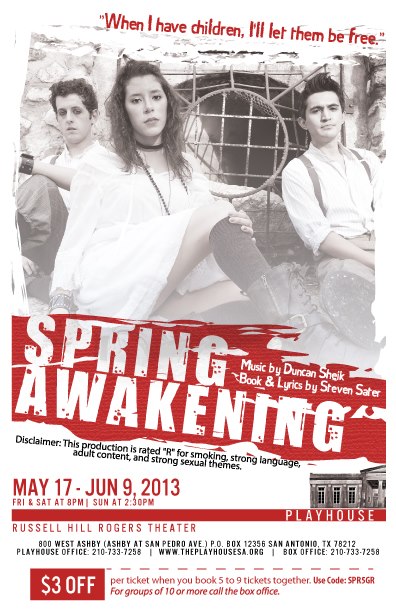 Little more than a decade ago, teen pregnancy was a source of great embarrassment and shunning by peers, family and society. Today, teen pregnancy seems to be a growing fad. Whether the issue is inadequate sex education, lack of access to contraceptives, a quick way to grow up and escape the current situation or a pact among friends, teen pregnancy is a growing problem.

According to the Centers for Disease Control and Prevention (CDC) three in 10 American girls will get pregnant at least once before age 20, totaling 750,000 teen pregnancies every year. At that rate the U.S. has one of the highest teen pregnancy rates in the western industrialized world. The National Campaign to Prevent Teen and Unintended Pregnancy reports babies born to teen mothers are more likely to be premature, and almost 10 percent have a low birth weight. In addition, children born to teenage mothers have significantly lower cognitive test scores at age two, compared to children born of intended pregnancy. The American College of Obstetricians and Gynecologists (ACOG) also found that the daughters of teen mothers are more likely to become teen mothers themselves, while the sons of teen mothers have a higher chance of being incarcerated than children with older parents.

Unfortunately, media hype surrounding the Gloucester High School pregnancies and similar high pregnancy rates at U.S. high schools accused of fostering pregnancy pacts has born teen pregnancy as entertainment in the form of MTV’s Teen Mom and 16 and Pregnant. Taking advantage of this trend in vogue, these shows portray teen pregnancy without many of the social and health complications inherent in being a teenage mother. The National Campaign to Prevent Teen and Unplanned Pregnancy estimates a quarter of teen moms have a second child within 24 months of their first baby and less than two percent of teen moms earn a college degree before age 30. Eight out of 10 fathers don't marry the mother of their child and pay less than $800 for child support each year.

While the three percent of teens age 15 to 19 who carry to term face socio-economic hardships, there are other risks for those who choose not to go through with the pregnancy. ACOG found that one third of teen pregnancies end in abortion. In 2008, approximately 1.21 million abortions took place in the U.S. was reported by the Guttmacher Institute. Half of U.S. women obtaining abortions are younger than 25 and 17 percent were obtained by teenagers. Forty percent of minors having an abortion report that neither of their parents knew about the abortion. Teen abortions are prone to more complications and health risks, even death, than those of older women.

Another harrowing fact about abortion is that suicide is six times higher for those who have had an abortion. A common thread in suicides is the person has been ostracized in some way for being different or doing something perceived as unacceptable. Many LGBT youth encounter this, especially in the form of bullying, every day. Although statistics on the subject are scarce, the Family Acceptance Project found LGBT youths experiencing high levels of rejection during adolescence were more than eight times likelier to have attempted suicide than those who were accepted by their families. Cases such as Tyler Clementi and Jamey Rodemeyer are examples of this very real issue. But LGBT youth are not the only ones contemplating suicide and dealing with stigmas.

Spring Awakening also presents the story of Moritz, a young man under pressure from his parents and peers to succeed in school. When his instructors decide to hold him back, despite the fact that he passed his exams, his parents disown him and he’s left to wander the streets. Today’s youth are influenced by many more pressures than those of their parents through many more mediums, but Moritz’s story still holds true. After finding himself homeless and hopeless to make a life for himself, he turns to suicide.

Nearly one in six high school students has seriously considered suicide and one in 12 has attempted it, according to the CDC. Suicide is the third leading cause of death for ages 15 to 24, behind accidents and homicide. It is the fourth leading cause of death for children between the ages of 10 and 14. Each year, emergency rooms across the U.S. care for approximately 157,000 youth between the ages of 10 and 24 for self-inflicted injuries. While boys are more likely than girls to die from suicide, with 81 percent of suicide deaths for ages 10 to 24 being male, girls are more likely to report suicide attempts and make up the remaining 19 percent of suicide deaths for that age group.


From teen pregnancy to abortion to suicide, Spring Awakening once again proves its relevance after over a century. It brings to light issues that are hiding in the closet, swept under the rug and concealed under clothing. Perhaps what Frank Wedekind intended was for audiences to see, acknowledge and understand our youth, in any century, in order to prevent losing them.


[Editor's Note: Spring Awakening is a rock musical set in late 19th century Germany, based off of a play by the same name by Frank Wedekind. It examines tough themes that still plague our society over a century later because they are controversial and difficult to explain or remedy.  What this piece does is present the issues, the truths and consequences of actions in order to reopen the age-old discourse of how to talk about and/or prevent the dangers resulting from each.
This is part of a series of posts intended to present the various themes illuminated in the upcoming production of Spring Awakening at The Playhouse. While the intent is to remain objective, any opinions expressed here do not necessarily reflect those of The Playhouse, those involved in the production of Spring Awakening or Theatre For Change.]
Posted by Jenni Morin at 7:40 AM