The Playhouse has transformed the Cellar Theater into the quintessential 1950s backyard, complete with overhanging tree branches and grass, for the production of Picnic by William Inge. This particularly detailed set makes a great canvas for naturalistic lighting and a realistic representation of life in the 1950s from the relationships to the costumes. 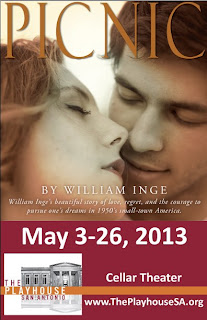 Picnic introduces a group of young people on the cusp of life changes and discovery. As Flo Owens (Tracie J. Coop) prepares for the town picnic, she reminds her girls to accept their roles. Madge (Kari Ann Randol) has always been the pretty one and Millie (Madeleine Garcia) is the smart one. Flo urges Madge to get a proposal out of her steady boyfriend Alan (Ty Mylnar), while Mrs. Potts (Catherine Babbitt), the next door neighbor, plays matchmaker for Millie and Hal (Rodman Bolek), somewhat of a roughneck and an old college friend of Alan’s. Bomber (Cris Boneta), the paperboy, teases Millie about her looks and Rosemary (Chelsea Dyan Steele), a teacher rooming at the Owens’, professes women don’t need men. After some sibling rivalry feuding, the girls get ready for the picnic. Millie dons a pretty frock and receives several compliments for her beauty, but she is still no match for her sister who steals Hal in an impromptu backyard dance. Rosemary, desperate to get some of the young man’s attention, forcibly dances with him and become furious when he rejects her advances. Millie, scorned, gets drunk from the whiskey Rosemay’s boyfriend Howard (Michael Benson) brought and soon the backyard party breaks up and moves to the picnic, leaving Madge and Hal to explore their newfound feelings for each other. The plot continues with several characters facing life-changing decisions and circumstances.

While Picnic is not a deep play with controversial themes, it offers a snapshot of everyday life in the '50s that still applies today. The age-old desire of children to break away from their parents and reinvent themselves in the odyssey self-discovery is what keeps resurrecting this decades old story. Some characters struggles to hang on to their youth, while others are desperate to leave it behind. Then there is the question of what defines beauty and if that can be enough to define a person and their existence.

Bolek shines as Hal, just when he seems little more than shallow, he is able to show the gamut of Hal’s personality and emotions when the script allows. Coop portrays a strong woman who is wise from her past, perfect for Flo. Mylnar is the picture perfect good ol’ boy as Alan. The cast of schoolteachers, led by Steele, is larger than life. Randol as Madge and Garcia as Millie both present their characters realistically with exchanges that take on what seems to be a modern tone and sarcasm unexpected of a play from this period. Director Tony Ciaravino kept the action and script relevant and led his cast and crew in a solid production. Picnic is an all-around success for The Playhouse.


Picnic will run at the Cellar Theater at The Playhouse from May 3-May 26, 2013 with performances at 8 p.m. on Fridays and Saturdays and 2:30 p.m. on Sundays. For more information and to purchase tickets, visit www.theplayhousesa.org.
Posted by Jenni Morin at 5:38 PM