Sarah Ruhl concocts a perfect cocktail of romance, comedy, and insightfulness as she draws back the curtain on onstage love interests in Stage Kiss. The Playhouse San Antonio's Cellar Theater production of Stage Kiss, now showing through Feb. 14, reminds actors why they love their families and why audiences love to be swept away by the characters, situations, and connectedness of live theatre. 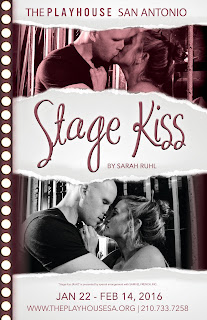 A rather meta-theatrical trip through a torrid romance, Ruhl has no qualms about exposing the ridiculousness of theatre and all its players through the quintessential stage kiss. When an actress is cast in a play after a decade off the boards, she attempts to make the best of having to work with her former love. Both battle succumbing to the plot of the play, no longer able to tell the person from the character when onstage kissing becomes more. Stage Kiss takes many twists, simultaneously overly theatrical and unexpected, which propel it toward the inevitable. From a random musical number to groan-worthy exposition to the plays within the play, Stage Kiss is, with all the intended irony and in the best way possible, that kind of play. Along the way, Ruhl presents several beautiful, and often critical, metaphors and observations about relationships, theatre, an actor’s craft, and reality, making it an irresistible script ripe for theatre lovers.

The Cellar Theater production of Stage Kiss is gloriously reminiscent and contemplative. Director J. Robert Moore found the delicate balance of comedy in each scene and throughout the play, but the melodic pacing and attention to the playwright’s juicy ruminations garner the highest commendation. Ryan DeRoos impressively fit two mainstage sets in the Cellar blackbox and created an apropos faux proscenium. Angela DeJano’s costumes were fitting and fun within the plays, while Denisse Chavez and Matthew Shavers’ lighting could have had a little more dramatic flare. The breakout musical numbers and tinny jazz, and somewhat vaudevillian, underscoring of Music Director Greg Bolin and Pat Smith’s sound design set the tone for a three-ring circus of a play. There were a few fumbles, inconsistencies between the tech and the script, and dismissed opportunities for immature innuendos—all forgivable flaws due to the nature of the piece.

Each of the actors wrangled the craziness into a magical and surprisingly sincere work. Renee Garvens and Tyler Keyes are magnetic scene partners and equally hilarious as their New Haven characters. Garvens and Keyes lead the cast through the zany and sentimental waves with a unique grace in both comedy and drama. Nick Lawson as the overzealous and peculiar Director Adrian Schwalbach paired with Travis Trevino as his stereotypical acting student, Kevin, create a delightful duo. Expertly and comically defining each of their multiple roles were Rainya Mosher, Brittney Thorne, and Matthew Byron Cassi, who deserves extra praise for the priceless execution of his prolonged death scene.

In the end—the real one, not the many false ones—Stage Kiss is a clever and introspective comedy with everything to love and loathe, but mostly love, in one play. While the script itself is worth the ticket, the Cellar’s production of Stage Kiss brings Ruhl’s commentary to life as a raucous and sentimental inside joke everyone wants in on.


Stage Kiss runs at The Playhouse Cellar Theater through February 14 with performances on Fridays and Saturdays at 8 p.m. and on Sundays at 3 p.m. For more information and to reserve tickets, visit theplayhousesa.org.
Posted by Jenni Morin at 6:47 PM