After nearly two decades, Crumpet the Elf has made his way into the holiday theatre repertoire. The Classic Theatre offers The Santaland Diaries as an “adult, ” and somewhat cynical, escape from the wintry sparkling wonderlands of holiday cheer. 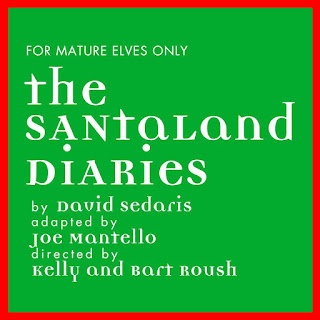 David Sedaris takes audiences on a reflective, and simultaneously terrifying, journey through Macy’s SantaLand, where he once worked as an elf named Crumpet. Joe Mantello’s 55-minute adaptation hugs tightly to the twists and turns of the line to see Santa until arriving to find the jolly old elf, and perhaps the true meaning of Christmas.

For those who loathe Christmas tunes blaring in department stores before Thanksgiving, be prepared for the aural assault of the most annoying carols while waiting for the show to begin. Rick Malone masterfully sprinkles his sound design with the most fitting, eye-roll worthy sounds of the season. The lighting by Kaitlin Muse perfectly complimented Allan S. Ross’ set with twinkling lights for the trees and plenty of play space on a peppermint. Thanks to directors Kelly and Bart Roush, A special kudos to the crew for impeccable timing and allowing the technical aspects to be the supporting characters in a one-man show. Of course, it was Diane Malone’s spot-on costume design that really brought the elf home.

Deftly directed by Kelly and Bart Roush, John Stillwaggon braves the stage, in tights, for his one-man performance as Crumpet. While the opening tone at the thought of taking a job as an elf wasn’t as detestable as expected, his portrayal was much more realistic than previous, more affected, interpretations. The intimate space and thrust staging allowed for less dramatics and a more empathetic response from the audience as a whole. Despite a few awkward transitions, Stillwaggon gracefully ushered the script along a subtle arc. By the end, it feels as though he has shed his Grinch demeanor and undergone an elfin metamorphosis. As Crumpet the Elf, Stillwaggon restores the belief in Santa and the spirit of the season.

The Santaland Diaries is a welcome disenchanted wonderland, but, done right, can be just as heart-warming as Tiny Tim. The Classic Theatre and John Stillwaggon deceptively turn holiday snarls into smirks and reiterate why this production is a holiday tradition.


The Santaland Diaries will run at The Classic Theatre through December 20, 2015 with performances at 8 p.m. on Friday and Saturday and 3 p.m. and 7 p.m. on Sunday. For more information and to purchase tickets, visit classictheatre.org.
Posted by Jenni Morin at 8:48 PM