The Rose wants to talk about RACE

David Mamet’s RACE is more pertinent, and perhaps polarizing, today than when it premiered six year ago, before Trayvon Martin and Michael Brown. The Rose Theatre Company’s production, now running through August 29, dares to tackle this difficult topic plaguing the American media and public conscience. 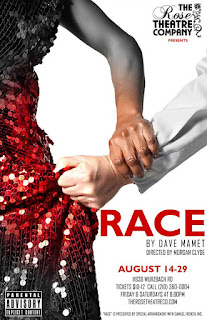 The play opens with two lawyers, one black and one white, Henry Brown and Jack Lawson, cataloging the many trials that brought about conspiracy within the justice system, racial and otherwise, to convince their prospective client, Charles Strickland, that he cannot win his case. Accused of raping his young black mistress, Strickland, a wealthy and successful white man, insists it was consensual and they were in love. As the afternoon unfolds, further evidence comes to light debunking the laywers’ defense strategy as Strickland insists on going to the press to tell his side of the story. Brown, along with their assistant Susan Davis, a young black woman, believe Strickland to be guilty from the start as Lawson jumps at the challenge to make the case not about race, or even sex, but the alleged victim’s red sequin dress.

Mamet’s dialogue is meant to be spewed at such a pace that the arguments can only culminate in reflective and seething silence. The build up during these exchanges felt lacking with an unsteady pace in The Rose’s production. Providing the most developed performance, Joseph Urick as Jack Lawson led the cast with snarky and arrogant rhetorical comments laden with politically incorrect descriptions. The rest of the cast often felt flat in their deliveries and disconnected from the action of the play. It wasn’t until the end, after much exposition by Torence White as Henry Brown, that Megan Van Dyke’s Susan Davis felt three-dimensional. David Blazer lacked a certain privileged pomposity indicative of the stereotypical Charles Strickland. While Chris Manley’s lighting worked for the space, it didn’t quite illustrate the short passage of time between scenes, making hours seem more like days. The sound effects were often mistimed, providing awkward moments, especially noticeable in a Mamet script where timing is crucial. The set, although appropriately painted in contrasting black and white, was sloppily constructed with bunched tape at the seams of the back wall and extraneous paint on the window, no at all reminiscent of a high-priced lawyer’s office. Director Morgan Clyde found the key lines to punch, along with some comedic moments to highlight, but the blocking often felt cluttered and stagnant for the stage configuration. Some of the extraneous exchanges in Mamet’s script can be blamed for the mid-play tangential trudgery, however it is up to the production to find the motivation and pacing to support the dialogue so it can have the intended impact.

RACE is as much about the systematic proliferation of racial tensions and injustices of the justice system as it is about race relations and perceptions. Mamet unearths simple, yet often disregarded, certitudes about the impracticality of color-blindness: as long as any one person is afforded certain advantages or exceptions based on race, it will influence the way businesses and people must behave and therefore make it impossible to treat everyone the same regardless of skin color. Little undeniable truths are sprinkled throughout RACE, as Lawson explains there is nothing a white man can say about race to a black person. Brown also acknowledges those of his own race who exploit it to get ahead, while Davis does just that.

With prejudices and perceptions so ingrained, the contradictory nature of affirmative action, and the struggle to reject racial identity yet celebrate cultural roots weighing down the debate, Mamet almost seems to sum up the denial of racism as succinctly as he does his play: guilty.

Regardless of the production quality, RACE at The Rose is worth the ticket to challenge conventional stances on race. If The Rose production’s whole purpose is to spur, or even halt, the timeworn discussion with new insights on the race debate, it’s a success.


RACE runs at The Rose Theatre through August 29 with performances at 8 p.m. on Fridays and Saturdays. For more information and to reserve tickets, visit therosetheatreco.com.
Posted by Jenni Morin at 11:07 AM