Jenni Morin talks with playwright David Legore about what prompted him to tackle academic freedom, campus carry and perceptions of PTSD in Trigger Warning.

For more information of the Theatre For Change production of Trigger Warning, visit theatreforchange.org/trigger-warning. 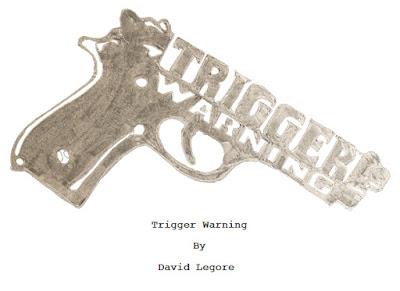 What first prompted you to write about trigger warnings?

To be honest, the origins of the play had nothing to do with trigger warnings, as I’ve come to understand them.  In fact, I had not even heard of the term or application until I had already begun writing.  My primary focus was on matters of free speech and academic freedom in higher education, and the various populations who are affected by and involved in these matters.  Early drafts of the play were entitled “Muzzle,” a title that I still find fitting for the piece.  In doing research, however, I happened upon cases involving trigger warnings, and the content seemed appropriate, timely, and relevant for integration in this play.  Ultimately, I’m interested in the dynamics of learning, and the exchange/dialogue between teachers and students as we seek enlightenment and truth.  Furthermore, I’m responding to trends and cases from across the country that demonstrate how complicated these matters have become in the modern corporate academy.

With the origins of trigger warnings in feminist blogging and violence against women, what was your motivation to turn the attention to combat veterans and PTSD?

As I’ve mentioned, the story was not originally informed by an awareness of trigger warnings or their applications in policy.  There was a confluence of events and inspirations that ultimately led to the creation and integration of the characters, subjects, and themes of the play.  I didn’t sit down to write a play about trigger warnings, combat veterans, PTSD, or any of the other myriad elements that one might extrapolate from the piece.  I wrote about characters and situations within a given setting—a setting that I happen to care deeply about.  I think creativity is often less linear and planned than we would like to think.  When the muse is working, she hits the artist with a variety of seemingly unconnected inputs.  The output is hopefully greater than the sum of the parts.  That said, I do find myself drawn to stories that explore our deplorable human tendency to be brutal towards each other.  Certainly, those victims of some traumatic or violent event—whatever the cause—are susceptible to post-traumatic stress.  I am sympathetic to these victims and the repercussions of their trauma, but these layers in the play are a peripheral and organic result of the writing process—and not a central matter that fueled my motivation.

In many ways, the modern world has led to a collective sharing of these stresses—and, necessarily, that has an impact on higher education.  The debate, of course, is how best to balance the care and concern for the individual with the need to challenge and prod the collective.  How can we best solve the world’s complex problems in a society that is so clearly polarized?  How can we cultivate meaningful dialogue and action among select citizens who demand insulating protection from anything that might offend their beliefs or sensibilities?  I think that storytelling is a tool that allows all of us to process these complexities in a communal way.

How long have you been working on the script and how many drafts have you written? Were the changes from each draft significant or minor?

I began writing in late May of 2014, and had a complete first draft in about three weeks.  Subsequent drafts have involved what I would call minor but meaningful changes—a gender change and the addition of a minor character, for example.  In a first draft, I’m quite deliberate before making a choice.  Thus, by the time I’ve completed that draft I’m pretty comfortable with the whole.  After allowing some time to pass, I find it helpful to return to the script on a regular basis with a fresh eye.   In all, I have written around ten drafts, with targeted goals for each revision.  For example, I might read and revise based strictly on the goal of “trimming the fat.”  Another read and revision might look for differentiation between character voices.  Ultimately, however, a writer can learn much from the early readings of the play.  Certainly, I will also learn a great deal from this premier production—which will undoubtedly lead to further revision.

The main character in the story has a huge change in his attitude toward the "triggered" student in the play. Does this in any way reflect your own views towards trigger warning policies?

Not necessarily.  I am certainly more aware of the history and intentions of trigger warning policy.  I would like to hope that I’m sensitive to the diverse and complex realities of the modern student population.  I would never attempt to intentionally and knowingly traumatize a student.  That said, as the character of Martinson asserts, I too am a flawed human being.  I have undoubtedly said or done things that were triggering to a student.  I am in a field that explores the “dramatic conflict” of the human condition—with stories that are often capable of triggering.  I also don’t claim to be an expert on these matters.  I’m a storyteller who is fascinated by them, and concerned about any trends or policies that would diminish or threaten our ability to explore truth (no matter the dangers), to dialogue with each other, and to take action for positive change.

What does it mean to you to have your play produced by your university, especially on such a touchy subject in academia?

It’s humbling, and I’m grateful.  As an alumnus and professor of 17 years, TLU has played a central role in my development as a human being and artist.  It has helped form and “reform” my desire to seek reconciliation for our broken world.  I think that is reflected in the play.  I think the willingness to support the production at TLU is also consistent with the Lutheran tradition of higher education, a bold tradition that has historically sustained the quest for truth—even if the truth involves some pain and conflict.  I receive inspiration and take comfort knowing that Luther himself provided a model of reformation for us—grounded in the example of Christ.

What is your prediction about the widespread adoption of trigger warning polices?

I hesitate to guess, however I think the chances of any general implementation are slim, if recent cases and the resulting reactions are any indication.  There are a lot of complicated layers.  I think the movement to implement policy comes from a place of good intentions.  I support efforts to help students have a positive and supportive educational experience.  The devil is in the details, however.  There is significant resistance to anything that would muzzle free speech and academic freedom.  This resistance is grounded in long-standing ideals about the goals of a liberal (liberating) education.  As Plato wrote in “The Allegory of the Cave,” there is significant pain for the prisoner during their journey towards enlightenment.

There’s also no guarantee that a policy would actually prevent a student from triggering—given the multitude of sensory stimuli that can lead to an episode (words, smells, colors, the weather, etc.)  A professor can control the dynamics of a classroom experience to some extent, but some of the most transformational moments for learning take place in unpredictable and uncontrollable ways—during times when the professor themselves may not know the answers.  As the character of Dr. Martinson says, “Asking the question, "Why?" is one of the most dangerous things you can ever do.  Especially if people are threatened by the answer.”

Have you had any personal experiences with triggers and students in your time in teaching?

Not that I would have understood or labeled as such at the time.  However, it has probably happened in my classroom or within the performing contexts that I supervise—whether to a student I work with, or an audience member that has attended.  Through colleagues, I’m aware of incidents that have occurred in their classrooms.  I’ve been fortunate to work in an environment that allows me to develop meaningful relationships with many of the students I encounter.  This proves helpful in establishing trust during our mutual quest for understanding.

Talk about some of the inspiration behind the set and media design for the show.

The scenography of the show is intentionally simple but suggestive of that place where a learning exchange occurs.  For a college campus, that includes locations both within and beyond the classroom—but with the aesthetic and impact of the classroom looming everywhere.  For generations, that exchange has involved words, images, and concepts, shared through mediums like the blackboard.  Modern technology has complemented these traditional mediums.  However, much like the shadows on Plato’s cave wall, the imagery of the design is intended to suggest a limited representation of truth.  Ultimately, in order for enlightenment to occur, a dialogue must provide dimension, nuance, and color to the black and white imagery.  An enlightened view of reality will necessarily involve elements that can cause (and trigger) pain.  A reading of “The Allegory of the Cave” also reveals that the goal of education and enlightenment is not a selfish end that one hoards for themself, but rather one that must be shared with others—including those other prisoners left in the cave.  As Plato describes, our return to the cave will also be met with pain, as we encounter the doubting and scornful voices of the unenlightened.

How do you think the medium of theatre can impact the dialogue about a subject? What do you hope audiences take away from this production?


As I’ve suggested elsewhere, I believe strongly that storytelling can provide a powerful forum for communion, reflection, dialogue, and action.  A story allows the audience to participate in a fabricated (but hopefully faithful) representation of truth that should ideally provoke them to think.  Thus, I hope the audience will engage with this play—much in the same way that I hope college students engage with their studies—in a willing spirit of openness.  I would also urge viewers to support the institutions and constituents of higher education as they grapple with the complex challenges of seeking truth in the modern world.