A new appreciation for Merchant of Venice

Shakespeare’s Merchant of Venice is a comedy on the cusp of tragedy as mistaken identities take a backseat to hypocrisy and vengeance. The Classic Theatre’s production of Merchant of Venice, now playing through March 1, continues the season’s theme of duty and justice with an intriguing script and powerful performances. 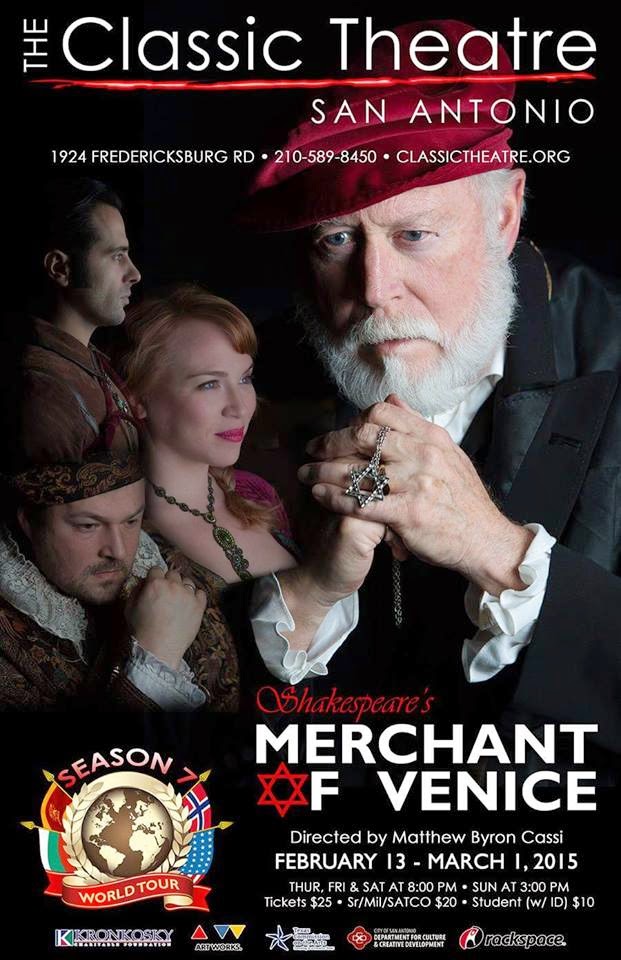 While adhering to the comedic staples of marriage, disguises and suggestive servants, Merchant of Venice also offers the drama of betrayal and desperation. Bassanio seeks out his friend Antonio, the title character, to loan him money so he may travel to Belmont to present himself as a suitor to Portia, who cannot seem to rid herself of unworthy suitors. Since Antonio has no cash on hand with all his ships at sea, he tells Bassanio he will vouch for him if he gets a loan. Bassanio asks Shylock the Jewish moneylender for the ducats, to which he reluctantly agrees due to Antonio’s anti-Semitic proclamations and rude treatment. Bassanio heads to Belmont to woo Portia, Shylock’s daughter runs away with the Christian Lorenzo and Antonio’s ships are lost at sea. Upon hearing the news that Antonio must pay his debt with a pound of his flesh, Bassanio rushes to his friend’s aid, followed by Portia and her maid Nerissa who pose as a doctor and law clerk to stop Shylock from killing Antonio. They are successful in arguing the case and Shylock is forced to give half his fortune to Antonio, convert to Christianity and leave his estate to his daughter and new son-in-law.

The Classic’s production of Merchant of Venice features an impeccable cast led by Nick Lawson as Bassanio, Allan S. Ross as Shylock and Christie Beckham as Portia. Lawson is a sincere Bassanio from his charming suitor to his despairing friend to his hilarious cuckold. Ross portrays a layered Shylock who is both monstrous and pitiable. Beckham presents Portia as a strong female lead, sensible and intelligent. While Mark Stringham as Antonio and Allie Perez as Nerissa are consistent in character and entertainment, John Stillwaggon’s Gratiano brings new life to each scene. Dru Barcus is a riotous Launcelot who proves more than a jester when paired with Susi Lopez’s thoughtful Jessica. Torence Brandon White gave a commendable performance as Lorenzo and the Prince of Moroco. Each actor playing dual roles was able to keep them separate and distinct, preventing confusion so customary in Shakespeare’s comedies.

Often disregarded for its anti-Semitism, Merchant of Venice is possibly the most thought-provoking of Shakespeare’s comedies. Rather than employing dramatics to inform the comedy, it allows the comedy to be the means that achieve the drama. The defining dramatic speeches argue revenge and justice while each making the case for Shylock as a villain and not. In many of his scenes, Shylock is more desperate than villainous and more cautious than cruel as Shakepeare makes the case of his humanity over his religion. Another debate surrounding  Merchant of Venice is the sexual preference of the title character, Antonio. The Classic’s production seems to emphasize the description of Antonio’s love for Bassanio and then furthers this unrequited love as Antonio sings a melancholy ballad as Bassanio mulls over the choice of caskets that will win him Portia. The song is meant to be sung by Portia’s court to help Bassanio choose correctly, so this choice makes a bold statement. However, Bassanio’s confession of love for Antonio during his trial is met with a sarcastic remark by Portia, minimizing the previous implication, making it very unclear if the script implied it in the first place. It is these much-debated and somewhat sensitive topics that make this comedy so versatile, complex and compelling.

Director Matthew Byron Cassi stayed true to the text and was careful not to make assumptions of Shakespeare’s intentions, but rather let the audience infer for themselves. The staging bordered on choreography as the opening scene and transitions synchronized with Darrin Newhardt’s original composition. Diane Malone’s costumes were ornate and accurate all the way to Shylock’s red hat. The set by Allan S. Ross defined the play’s two locations simply and elegantly with understated nods to the characters. The marbling and tiles were beautifully executed by Scenic Artist Karen Arrendondo. The lighting design by Alfy Valdez was poignant and impactful as it established each scene in mood and setting.

While modern audiences may find the anti-Semitism in Merchant of Venice shocking, the homosexual tension may be inconsequential and completely opposite to the original audience's interpretation. To top it off, Shakespeare jabs at hypocrisy and makes a point of equality and humility by discussing mercy and justice. Merchant of Venice exemplifies William Shakespeare’s genius and The Classic’s production does great justice to the script, characters and intentions through purposeful staging and technical craft.


Merchant of Venice will run at the Classic Theatre through March 1, 2015 with performances at 8 p.m. on Friday and Saturday and 3 p.m. on Sunday. For more information and to purchase tickets, visit classictheatre.org.
Posted by Jenni Morin at 12:53 PM