Enveloped by the darkness, an ember burns. Mark Rothko, played by Andrew Thornton, surveys his works as if to take an inventory. A young man in a suit enters, waits awkwardly at the entrance until daring to interrupt the artist’s thoughts with a knock. This awkward apprentice (Ken, played by Rodman Bolek) is motioned over to contemplate a painting. “What do you see?” Rothko asks. “Red.”

The Playhouse invites audiences into Red, the intimate world of Mark Rothko, the abstract expressionist painter known for his blocks of color. The action of John Logan’s play takes place over the time in which Rothko paints a series of murals commissioned for The Four Seasons. Although the playwright takes liberties with the sequence and some details of Rothko’s biography, Red is Rothko’s journey to realizing he cannot let his works reside at The Four Seasons—an abrupt decision he made with a reason he took to his grave.

Mark Rothko seems to be a shallow artist, narcissistic, with an esoteric philosophy about the transcendent nature of his work. He quotes philosophers and goads his assistant about not knowing what he needs to know to be an artist. Thornton and Bolek handle the transition seamlessly from an awkward employer/employee relationship to a comfortable, at times contentious, mentor/mentee. The continuous narrative consists of incessant dialogue with poignant pauses carefully crafted by director Tim Hedgepeth. It is in these debates we discover Rothko’s attachment to his paintings reaches beyond mere vanity, as he sees them as an extension, a reflection of himself. He rejects being reduced to a noun, “a Rothko,” and in turn insists that red is not a color, but a thing, and that his paintings have a pulsating movement that keeps them alive. 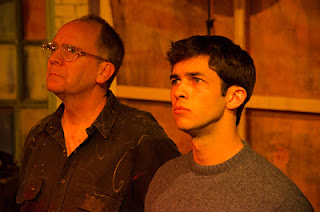 As the play progresses, a paternal figure emerges. Rothko, in his own detached way, takes his assistant under his wing, teaching him about his great influencer Nietzche and how colors are more than pigments on canvas. Rothko expresses his fears of his works feeling hurt for being regarded in a way other than he intended, orphaned without their father even as the series should have strength in number. He talks about their vulnerability to natural and florescent light.

After years of philosophizing about his work, pontificating on tragedy and the ever-pulsating force of his paintings, the assistant counters asking if anyone is worthy to even see his art. It is also Rothko’s assistant who challenges his obsession with black and its clichéd meaning of death and how the color threatens to swallow his works and his life.

As his commissioned works approach their installation, Rothko is confronted by the commercialization of his success. His assistant likens him to his art forefathers, the cubists, when Rothko is distraught over the pop artists plotting to kill, committing patricide against, abstract expressionism. Hamlet references abound. Rothko’s deteriorating confidence in his pomposity and fear of eventual irrelevance overwhelms him as he is accused of selling out. 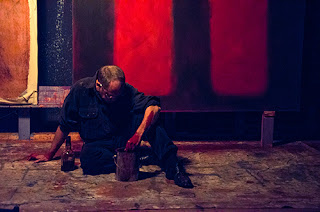 Red is a commentary on art, a metatheatrical discussion about the necessary coexistence of art, philosophy, culture, music and theatre. As theatre often holds a mirror up to society, Red begs a two-sided mirror where, if the light is just right, the artist beneath is illuminated from within the work; his pulse becomes that of the painting.

The Playhouse’s production of Red allows a focus on the artist’s relationship with his work rather than the enigmatic philosophy behind it. By resisting stereotypes of the painter and his apprentice, the actors and director do the script justice and are complimented by discernible musical choices and purposeful lighting. The performances of Thornton and Bolek are haunting and resonate well after the stage goes dark. Red challenges its audience to look beyond the medium of the work to the inherent reason and message and asks, "What do you see?"


Red opens at The Playhouse Cellar Theatre on Friday, Jan. 25 and runs through Feb. 17 with performances at 8 p.m. on Friday & Saturday and 2:30 p.m. on Sunday. For more information, visit www.theplayhousesa.org.
Posted by Jenni Morin at 9:46 AM