Tribes, by British playwright Nina Raine, explores how one’s mode of communication can define identity and belonging, while creating silos of communities. Now showing in the Cellar Theater through June 12, The Playhouse’s production of Tribes is an intense confrontation of connections taken for granted and language, spoken and unspoken. 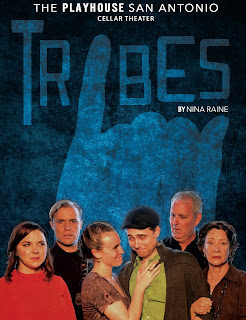 Tribes opens with Christopher and Beth, both in their 60’s, dealing with all three of their adult children living at home again by spouting obscenities and disapproval. The family is supportive and loving in a damaging hyper-critical kind of way as Ruth tries to launch a career in opera, Daniel deals with relationship and psychological problems, and Billy, who is deaf from birth, returns home after college only to realize how much his family ignores him. The chaotic conversation of language and literature dominates this household of self-proclaimed creatives, while Billy’s inability to fully grasp the conversation or participate in it increasingly isolates him. When he finds solace and a companion in Sylvia at a deaf art show, he begins to immerse himself in the deaf community. As their relationship grows, Sylvia struggles with slowly losing her own hearing and Billy confronts his family. Each character must find a way to fit in, either within the family or their new personal situation, and express themselves in a way that may redefines their identity and how others interact with them.

Deafness is surprisingly loud as the Tribe characters describe the roars, rumbles, static and interference that bombard them in the same way the noise pollution of the human, animal, musical, mechanical, and electronic sounds disrupt a hearing person’s concentration. All the characters struggle with distinguishing what is being communicated through the noise and translating it into an understandable language, which is revealed as inextricably tied to their identities. While what a person is may be defined externally, determining the who can incite an internal struggle for finding identity and community. The cautionary tale of the Tribes family is the isolation of their household and self-disenfranchisement from a larger community, which could offer a sense of belonging as Billy discovers. Unfortunately, an individual’s identity is as much their personal discovery as it is society’s assignment, and conforming to the pre-determined abilities and disabilities of those assignments often outweighs respect for the person. What breaks apart the family in the play, and society as a whole, is an unwillingness to listen and let a person communicate—by expressing themselves in whatever language they choose, verbal or nonverbal—who they are and whether they consider their differences abilities or disabilities.

Director John O’Neill presents a compelling production with a diversely talented cast as he maneuvers actors through a literal and metaphorical treacherous terrain. Mark McCarver showcases his immense range in portraying Billy and taking on sign language for an emotional climax. Dedicated to his bombastic rants, Gary Hoeffler brings life to the polarizing character of Christopher. Kathy Couser beautifully plays Beth as the mother who holds the family together. Kimberlyn Gumm’s Ruth manages being over dramatic and levelheaded, often providing much-needed comedic relief. John Stillwaggon takes on a difficult role in Daniel, but the execution feels distracting and inflated at times. As Sylvia, McKenna Liesman provides a confident and solid performance, demonstrating her talent and range.

The set design by Ryan DeRoos impressively accommodates a large number of actors for the Cellar’s limited space, allowing them to move freely around the varied levels within the design of the living/dining area of the house, as well as the sliver reserved for Billy and Sylvia’s interactions. Pat Smith’s sound design begins with ironically tranquil symphonic interludes then slowly comes to mirror the disruption of normality, while simultaneously providing an auditory sampling of the noise of deafness. Angela Hoeffler’s costuming is both appropriate and flattering, yet sometimes at odds with the less than modern props and furniture. The addition of projected subtitles was welcome and a nice multimedia touch, along with the attempt to visually illustrate music to cap the first act. The lighting by Rachel Atkinson was suitable, although it occasionally made the subtitles difficult to read and felt disjointed with the sound coming out of scene transitions.

Tribes offers a profoundly different theatre experience while demonstrating how inclusiveness can elevate empathy and the senses for a visceral audience reaction. The Playhouse production of Tribes is an impressive confluence of language, emotion, and technical compliments, and a prime example of how theatre can be both impactful and introspective.


Tribes runs at The Playhouse Cellar Theater through June 12 with performances on Fridays and Saturdays at 8 p.m. and on Sundays at 3 p.m. For more information and to reserve tickets, visit theplayhousesa.org.
Posted by Jenni Morin at 10:24 AM