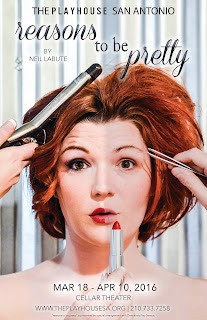 Written in 2008, reasons to be pretty serves as a precursor to the semi-anonymous commentary proliferating social media where apathetic insults are hurled upon unsuspecting readers and creating a culture disinterested in thinking before speaking – or rather, posting. When Greg unwittingly compares the looks of a new girl at work to those of his girlfriend, Steph, he is over heard by Kent’s wife, Carly, who tells Steph that Greg thinks she is ugly. Greg’s comment hurts Steph so deeply, she ends their four-year relationship. Carly gives Greg the cold shoulder until she needs him to admit Kent is having an affair with the pretty new girl who started the whole thing. Greg, after months of self-reflection, becomes fed up with Kent and his disregard for his wife and obsession with women’s looks. Stuck in dead-end jobs and unfulfilling relationships, each character has a moment where they must decide to move past the superficial nature of their lives and look deeper into what will make them happy.

Director David Rinear creates a beautifully choreographed dance, taking advantage of the open space and moving the actors in a way necessary for the staging, but also to keep the pacing in a play that can sometime feel repetitive as profanity dominates the vocabulary of the characters. Since LaBute’s characters can and do exist anywhere and everywhere, the blank stage of the Cellar’s blackbox space allows for the characters to be exposed, unadorned and everyman. Ryan DeRoos’ set design epitomizes less is more while Megan Reilly’s simple, yet textured lighting design perfectly compliments the blank stage. The sound design by Pat Smith sets the time period with nostalgic alternative popular music of the 2000s, although the abrupt fadeouts after scene transitions feels a bit jarring. The costumes by Sophie Bolles bring the production together, setting the scene in the absence of set pieces.

As Greg, Ty Mylnar taps into the quintessential clueless male, but shows his talent by balancing a deer in headlights looks with quick witted quips, which add a much needed tinge of intelligence and humor to the production. Nathan Thurman takes on the sleazy womanizing Kent who cares more about a company baseball trophy than his relationships. Ashley Greene as Carly  represents the pretty in the title and plays to the character’s ditziness, although sometimes missing the mark on genuine emotions. Laura Michelle Hoadley brings out Steph’s crazy while maintaining her romantic, sometimes pragmatic, sentiments toward her idea of what a relationship should be.

LaBute has earned a reputation as a misanthrope, but his accuracy in how so many millenials speak and think can feel like an unabashed criticism of an entire generation when it’s so far removed from the reality of the traditional theatre patron. But what continues to make reasons to be pretty relevant are the many angles from which it can be approached. For example, while rampant narcissism is still a theme in today’s social media culture, the shift to body shaming and trolling has become the new focus and comments on another’s looks are on full display in this work. In a world where emojis replace words and profanity replaces adjectives, it’s not hard to imagine those in a less than glamorous life with little prospects clinging to fleeting youth and beauty. In the end, it’s refreshing to see a realistic evolution for most of the cast as they finally make decisions to better their lives and leave behind what has stunted their maturity.

While LaBute details an authentic glimpse at an intriguing age group, reasons to be pretty allows the audience to ascertain the subtext and do what theatre is meant to do—hold a mirror up to society. The Cellar Theater provides the perfect venue for reasons to be pretty as it showcases the keen eye of a seasoned director at the helm of a complimentary cast.


Reasons to be pretty runs at The Playhouse Cellar Theater through April 10 with performances on Fridays and Saturdays at 8 p.m. and on Sundays at 3 p.m. For more information and to reserve tickets, visit theplayhousesa.org.
Posted by Jenni Morin at 2:05 PM