The Amish Project: A reflection on school shootings

The Amish Project by Jessica Dickey exposes the residue tragedies leave in individuals’ lives with a frankness that is uniquely human. The AtticRep production, showing at The Tobin Center’s Carlos Alvarez Studio Theater through February 21, depicts the raw and stark reality a community must face as they are forced to find themselves in the aftermath. 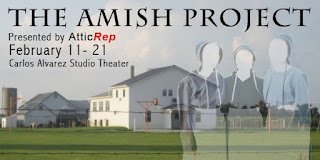 In 2006 in Nickel Mines, Pennsylvania, a local milk truck driver opened fire in a one-room Amish schoolhouse, killing five girls and injuring five more all between the ages of 6 and 13 before killing himself. A national media story, the Nickel Mines shooting most notably showed the grace, compassion and ability to forgive on the part of the Amish people. Dickey’s script features fictional representations of people affected by the shooting, including the gunman’s widow, townspeople and shooting victims, all played by a single actress.

Sarah Gise excellently portrayed the individual characters in body and tone, exhibiting an enormous talent. The delineations between each individual were evident and the transitions fluid, while the gender of the male characters remained less obvious. Although some accents faded and mannerisms crossed as the final scene approached, the seemingly unvaried facial expressions were what kept the characters from coming alive. Director David Connelly highlighted the staccato moments of quick transitions and created time for the audience to digest some of the more poignant and thought-provoking lines. Altogether, the production felt seamless with a pace that made the subject matter approachable as well as affecting.

The technical aspects of the production helped define the characters as much as Gise’s voice and stance did. The lighting design by Tim Francis featured colors that evoked an almost visceral response to the characters they represented. Whether a pastel colored cyc, a distinctive pattern for texture, a shadow-casting television, or a sharply focused square spotlight, the lighting distinguished emotion from scene to scene. Furthering the tone of each scene were the sometimes light, often natural, mostly ominous musical selections and effects of Cole Wilson’s sound design. Of particular note was the evolution from light and carefree to dark and stormy during the pre-show, followed by chillingly deep strings and whispering winds throughout.

Dressed in a simple blue dress with white apron and bonnet, Martha Penarand’s costume design anchors the production, providing an opportunity for audiences to reset and truly consider how the lifestyle of these people has persevered their faith, innocence and, possibly, sanity. Along the lines of simplicity, Jeremiah Teutsh’s bare set, save for a sturdy wooden chair, confined Gise to an angular platform backed by a horizontally slatted fence—a nice metaphor for the seemingly random horrors the Amish see as part of a larger plan.

Whether it’s anger, grief, helplessness, fear or confusion motivating the response to tragedies like Nickel Mines, The Amish Project offers a means of processing the event and encourages a dialogue about society’s need to answer the why. Perhaps the relative pacifist nature of the script, lack of intense re-enactment, and media coverage saturated with shootings since has dampened how jarringly powerful The Amish Project was when it premiered in 2008. While today’s audiences may be jaded or numb, the messages still resonate.

All the elements of the AtticRep production of The Amish Project melded into an interesting study of human nature in the face of tragedy to create a graceful and engaging experience. In addition to a well-executed show, AtticRep encourages audiences to reflect on how these events shape personal and societal reactions and how changing those reactions can strengthen a community rather than divide it.


The Amish Project runs at the Carlos Alvarez Studio Theater at the Tobin Center through February 21 with performances at 8 p.m. Thursday through Saturday and at 2:30 p.m. Sunday. For more information and to reserve tickets, visit atticrep.org.
Posted by Jenni Morin at 9:14 AM