Death of a Salesman or the American Dream

With the American dream comes a stark opposing reality, which is so well illustrated in the American classic Death of a Salesman by Arthur Miller. This 1949 play, now in production by the Classic Theatre through February 23, continues to be relevant generation after generation with an abundance of themes that hit close to home, perhaps even more so for this generation than the last. 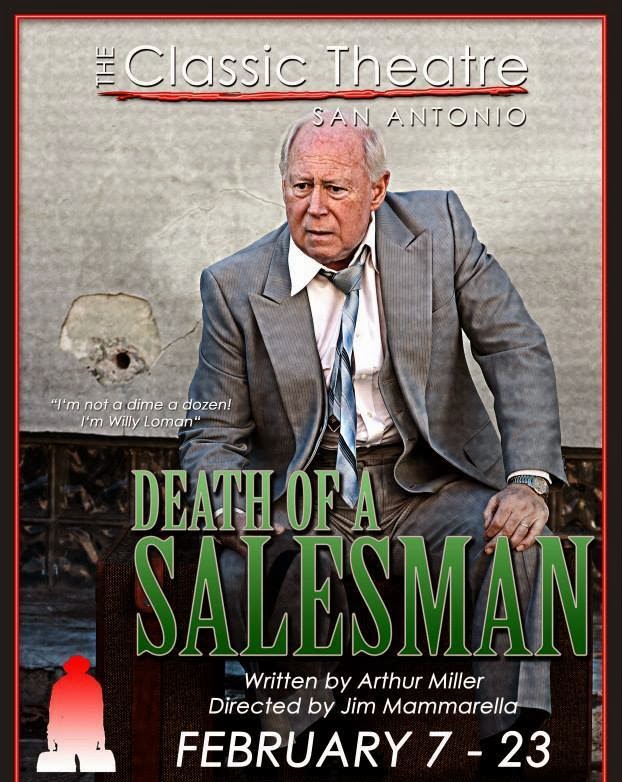 As Willy Loman returns home from an exhausting sales trip, his family is confronted with his unstable state. A little lost and perhaps unwilling to make of themselves what their parents hoped, Biff and Happy grow concerned about their father while their mother Linda scolds them for not offering to help the man who gave everything so they could be something. Willy drifts between the present and the past, talking to the ghosts of what has been and desperately clinging to intangible promises of a hopeful future. After 35 years as a salesman, he still struggles to pay his bills, but insists success hinges on being well liked. In contemplating his death, he imagines a funeral packed with buyers and salesman as proof of the heroic successful persona he’s created to cope with his failure.

Classic Theatre’s Death of a Salesman boasts a star-studded cast of San Antonio’s finest talent. At the helm is Alan S. Ross as Willy Loman whose performance is near flawless, allowing every twist and turn of his conscience to wrench the audience along. Following suit, Terri Pena Ross as Linda exudes motherly guilt and wifely tenderness as she ferociously defends her husband to her sons. Anthony Ciaravino as Biff sculpts his character’s arc while having a noticeable effect on the audience as they sweat and squirm along with him in a moment of truth and fall pin-drop silent at the crest of the play’s final crescendo. As Happy, Jared Stephens helps move the action along, always offering a jolt of energy to kickstart the next scene.
Uncle Ben, played by David Rinear, felt like an apparition throughout, playing on Willy’s idolatry for him. Byrd Bonner’s performance as Charley was out of sync with the nuanced performances of the rest of the cast. As Charley’s son Bernard, however, Kenneth Lopez remained consistent from flashback to present as the voice of reason and the poster boy for success. The supporting characters and cast held their own, adding to the overall production.

From transitions to overlapping dialogue, Jim Mammarella’s direction was superb. The scene changes were seamlessly choreographed and beautifully underscored by Rick Malone’s impeccable sound design reminiscent of American classic film noir. The soundtrack even spoke to the memory of Willy’s father by featuring the flute. While the lighting design was relatively straightforward, the use of shadow, particularly in the opening scene, was extremely effective. Ronald L. Watson’s set design and Diane Malone’s costume design rounded out this acutely detailed production with touches seemingly as simple as flowered wallpaper in Willy’s bedroom to Linda’s hair bow.

Death of a Salesman in this day and age manifests itself like a commentary on parenting and how it influences a child’s future success. Willy appears to have the perfect life until one solitary moment prompts Willy’s slow unraveling and Biff’s string of failed jobs. Biff ultimately blames his father for blowing him full of hot air so he could never take orders from anyone. His torture is the reality that the phony dreams Willy has for him don’t match up with the person he is and Willy refuses to accept it or himself. With so many stories today about the current generation entering the workforce not being prepared mentally or emotionally for the challenge and impending failure that comes with a job, Biff’s plight is certainly identifiable. Willy, on the other hand, finds empathy for not understanding why his sons didn’t become successful when he did and said all he knew to raise his sons right. Even Linda is baffled by her sons’ detachment and unwillingness to help their father in his time of need. From the education system to social media to entitlement and affluenza, it’s diffucult to place blame, but Willy’s story helps to strip away the modern excuses and rest only on the question of who controls the future.

Miller’s play positions the American dream as largely unfulfilled or unattainable. Willy works his entire life to pay for a house no one lives in and to provide for his sons so they can do better than he could, yet his personal faults and shortcomings seem to hinder the realization of this dream. His seesaw of hopefulness and hopelessness mirrors today’s uncertain future of the American dream and those looking to secure it. This award-winning play challenges our definition of personal success and what, if anything, are we working toward.


Death of a Salesman will run at Classic Theatre’s new venue, the Blackbox Theatre at the Woodlawn, through February 23, 2014 with performances at 8 p.m. on Fridays and Saturdays and 3 p.m. on Sundays. For more information and to purchase tickets, visit www.theclassictheatre.org.
Posted by Jenni Morin at 2:36 PM